Net closes around Cristina Kirchner, accused of cover-up in 1994 bombing of Jewish centre 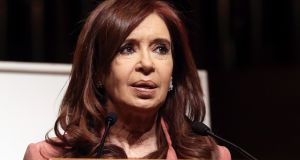 The legal net closing in around Cristina Kirchner tightened this week after a judge charged the former Argentine president with treason.

In an unprecedented ruling on Thursday, judge Claudio Bonadio called for Ms Kirchner’s arrest over her supposed role in covering up Iran’s alleged involvement in the 1994 bombing of a Jewish community centre in Buenos Aires. The attack killed 85 people in the worst anti-Semitic atrocity since the second World War.

As she was elected to the country’s senate in October, Ms Kirchner, who left the presidency in 2015, enjoys parliamentary immunity and can only be detained if the chamber votes to strip her of it. Currently her deeply divided Peronist movement has enough votes to block such a move.

Ms Kirchner denies all the accusations, saying the case against her is a political witch-hunt being orchestrated by her right-wing successor president Mauricio Macri.

If convicted, she could face up to 25 years in prison, but with ample opportunities to appeal in Argentina’s slow-moving judicial system, that possibility is remote. Former president Carlos Menem has faced multiple corruption investigations since leaving office in 1999 and, though convicted in several cases, including arms smuggling and embezzlement, remains beyond the reach of justice thanks to the senate seat he has held since 2005.

Judge Bonadio also ordered the detention of former foreign minister Héctor Timerman, placing him under house arrest because of his poor health. Also arrested was Carlos Zannini, one of Ms Kirchner’s closest aides during her presidency, who is being held with three others charged in the affair.

All are accused of working to help free Iranian officials from responsibility for their alleged involvement in the attack on the Asociación Mutual Israelita Argentina (AMIA) which was carried out by Hizbullah, the Tehran-backed Lebanese militia.

In return for doing so, the judge said Argentina received lucrative trade deals. The accusations against Ms Kirchner in the AMIA case were first made by prosecutor Alberto Nisman in 2015. He was found dead four days later in mysterious circumstances.

Ms Kirchner is also charged in a separate corruption case and has seen several close allies detained in recent weeks.

In October her former planning minister Julio De Vido was detained after the lower house of congress stripped him of his parliamentary immunity. He was followed into prison last month by her former vice-president Amado Boudou.

The flurry of arrests followed the defeat of Ms Kirchner’s Peronist bloc in mid-term elections which strengthened Mr Macri’s position in congress. His government has denied any role in the investigations into his predecessor’s administration, saying the matter is “strictly judicial”.