Putin to seek re-election as Russian president in March 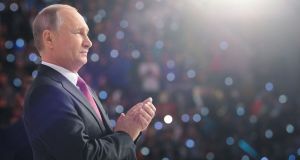 Vladimir Putin declared on Wednesday that he is to seek a fourth term as Russia’s president in an election next March.

Mr Putin revealed his long-awaited election plans during a visit to Russia’s flagship GAZ automobile plant in Nizhny Novgorod, a city 420km east of Moscow, where workers were celebrating the 85th anniversary of the start of production.

“I will put forward my candidacy for the post of president of the Russian Federation. “There is probably no better place or reason for an announcement of this sort,” he said.

The announcement was met with jubilation as workers began chanting “GAZ is for you!”

Few in Russia had any doubts that Mr Putin would stand for re-election, but the Kremlin has been keeping people guessing about the president’s future plans.

The timing of the announcement appeared designed to deflect attention from the International Olympic Committee’s decision this week to bar Russia from the 2018 Winter Games over doping charges.

Russia denies IOC charges that it engaged in a state-sponsored doping campaign aimed at enhancing the performance of its athletes at the Winter Games in Sochi in 2014.

Mr Putin complained on Wednesday that the IOC’s ruling was unfair, but said that Russia would not retaliate by boycotting the Winter Games in PyeongChang, South Korea next February. Russian athletes were free to compete as neutral candidates if they wished, he said.

Mr Putin has been in power, either as president or prime minister, since 2000 when Boris Yeltsin retired and named the former KGB officer his anointed successor. If he wins a fresh six-year term in March, Mr Putin will have been de facto leader for 24 years, longer than any other ruler of Russia except Joseph Stalin.

The election will be held on March 18th, the day Russia celebrates the annexation from Ukraine in 2014 of Crimea, a landmark event that while condemned as illegal in the west, boosted Mr Putin’s already high popularity ratings in Russia above 90 per cent.

Although euphoria about the capture of Crimea has subsided somewhat, Mr Putin is still admired by many of his countrymen as a strong leader who has restored some of Russia’s lost standing as a global power. More than 60 per cent of respondents to a recent survey by the independent Levada Centre polling agency said they would vote for Mr Putin in the next presidential election.

Alexei Navalny, an anti corruption campaigner believed to be the only opposition leader capable of presenting a serious challenge to Mr Putin, has been disqualified from the election race following a fraud conviction that he claims was politically motivated.

Various new candidates have come forward in recent weeks including Kseniya Sobchak, a liberal Russian socialite and TV hostess, and Boris Titov, Russia’s business ombudsman, who is representing the pro-business Party of Growth. Ms Sobchak has admitted she has no chance of beating Mr Putin. Announcing his plan to run, Mr Titov said Mr Putin was “the guarantor of stability in Russia”.