Man appears in court over plot to assassinate Theresa May 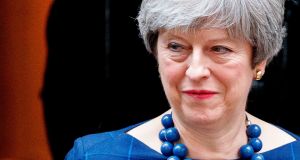 A man was remanded in custody in Britain on terror charges over a plot to assassinate prime minister Theresa May. Photograph: Tolga Akmen/AFP/Getty Images.

A man has been remanded in custody accused of a plot to kill UK prime minister Theresa May.

Naa’imur Zakariyah Rahman (20) allegedly planned to launch a bomb attack on the security gates outside Downing Street before detonating a suicide vest in Number 10 in a bid to kill Ms May.

Mr Rahman has been charged with preparing acts of terrorism and appeared in Westminster Magistrates’ Court alongside Mohammed Aqib Imran (21), who is accused of trying to join Islamic State.

Details of the assassination plot were reportedly given to the cabinet on Tuesday by head of MI5 Andrew Parker in a briefing in which he revealed that a total of nine Islamist terrorist plots have been thwarted in the UK over the past year.

Mr Rahman, from north London, is also charged with assisting Mr Imran in terror planning, while Mr Imran, from southeast Birmingham, is charged with preparing acts of terrorism.

Chief magistrate Emma Arbuthnot remanded the pair in custody to appear at the Old Bailey on December 20th.

Mr Parker’s cabinet briefing came on the same day that a review of a string of UK terror attacks earlier this year revealed that the Manchester Arena bomber was known to MI5 and his attack, in which 22 people died, could have been stopped “had the cards fallen differently”. – PA