Coronavirus: Trump says he may end shutdown early to save economy

Virus spreads across US with New York as epicentre with 20,000-plus cases 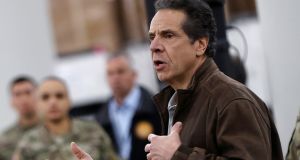 New York governor Andrew Cuomo: A total of 157 people have died from the virus in New York, accounting for approximately one-third of all deaths in the US. Photograph: Mike Segar

US president Donald Trump hinted on Monday that he could consider reopening key parts of the US economy, amid frustration with the economic impact of the coronavirus pandemic.

In a tweet written completely in capital letters, Mr Trump wrote: “We cannot let the cure be worse than the problem itself”, stating that a decision would be made “as to which way we want to go” after the 15-day period of the national emergency expires in just over a week’s time.

This potential shift in strategy appeared to be echoed by his chief economic adviser Larry Kudlow, who suggested in a media interview that the president was “right” in his tweet, and warned there could be “difficult trade-offs” ahead.

“We’ll be looking at a number of different things. Let’s give it another week,” he said.

The comments by Mr Trump and Mr Kudlow – underscored in a series of retweets issued by the president on Monday morning – came as the nation’s top health officials continued to warn that coronavirus was continuing to spread across the United States. US surgeon general Jerome Adams warned on Monday that this week “it’s going to get bad”.

“I think there are a lot of people who are doing the right things, but I think that unfortunately we are finding out a lot of people think this can’t happen to them,” he said. “We don’t want Dallas or New Orleans or Chicago to turn into the next New York. It means everyone needs to be taking the right steps right now.”

New York state continued to find itself at the epicentre of the health crisis, reporting more than 20,000 cases. A total of 157 people have died from the virus in New York, accounting for approximately one-third of all deaths in the US.

Several states continued to announce restrictions on businesses and public services. The governor of Virginia, Ralph Northam, announced that all schools in the state would remain closed until the end of the academic year. New York governor Andrew Cuomo ordered all hospitals to increase their capacity by 50 per cent.

As wide swathes of American life remained in lockdown on Monday, senators negotiated the details of a $1.8 trillion stimulus package on Capitol Hill. A breakthrough was expected as early as Monday night.

But on Monday afternoon, for the second time in two days, Democrats voted against the Bill in a procedural vote, prompting accusations by Republicans that the party was politicising the process. Ahead of Monday afternoon’s vote, Senate majority leader Mitch McConnell urged Democrats “to stop playing politics and step up to the plate. The small businesses in their own states deserve it, their own state’s emergency room doctors deserve it, their own constituents who have lost their jobs, deserve it”.

“Why can’t half the Senate rise to the occasion at a time when the country is pulling together, they’re pulling us apart.”

But Democrats insisted they were simply trying to ensure that protections for workers, the environment and oversight of corporations are included in what promises to be the biggest bailout package in US history.

Chuck Schumer, the top Democrat in the Senate, said he was confident of reaching a deal on Monday, noting that he was in continuous discussions with treasury secretary Steve Mnuchin.

The stimulus package under discussion – which could approach $2 trillion – comprises direct payments to taxpayers, a bailout programme for airlines, and a range of measures to help businesses.

US stock markets spent much of Monday in negative territory, plunging in the afternoon after the defeat of the Bill on the Senate floor. This was despite the announcement of a new bond-buying programme by the Federal Reserve on Monday morning before markets opened.