Coronavirus: Enhanced income supports due to be announced 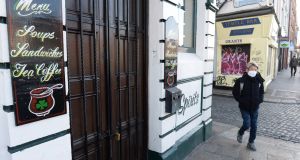 A new enhanced package of supports for those affected by the coronavirus pandemic running to billions of euro is expected to be announced by the Government on Tuesday.

It is understood that the extended package of income supports will have two elements. One will be a substantial increase in the €203 weekly welfare payment announced earlier this month for people who lose their job due to the Covid-19 emergency.

The second element is an income support scheme similar to that announced recently by the Danish and UK governments, which would see workers continue to receive a significant proportion of their salaries up to an overall cap. The move is aimed at allowing workers and their employers to retain links as the coronavirus crisis deepens.

The Irish scheme will take a number of weeks to fully set up but the outline is due to be announced by the Government on Tuesday, although the precise details were still being worked out on Monday night.

It is understood the scheme will see the State pay employers 70-80 per cent of a worker’s salary up to a level of €35,000-€40,000, or around the average wage, and the business will then pay the worker. It is expected that the scheme will be administered by the Revenue Commissioners.

When the overall package is announced, the intention is that those in receipt of income support payments and the Covid-19 welfare payment will receive roughly the same.

Other sources said that businesses applying for State support would have to prove that their income had dropped by 25 per cent and that they had liquidity difficulties.

The move follows pressure from both union and employer representatives, who over the weekend proposed income support packages to run for several months at a cost of €1.75 billion-€2 billion.

Separately, other proposals under consideration by Government officials could see creche workers redeployed to care for the children of key workers in their homes.

The proposal, if adopted, would provide continued employment for childcare workers and could see a payment by the State to creche owners, which could be used to fund wage payments.

However, it is understood that this proposal is one of several under consideration by the Department of Children, in consultation with the National Public Health Emergency Team. The plan may yet not be adopted, or elements of it could be included in a hybrid plan. Sources are optimistic that a childcare plan for frontline workers will be finalised this week.

However, it must meet with the approval of the emergency team, who must be satisfied that the childcare plan does not expose healthcare workers, gardaí and other frontline staff to undue risk. That will be the final criteria for approving a plan, sources said. Options that included the mixing of children from different families in a group to be minded are highly unlikely to meet with approval from the team.

Such a plan would also have to address issues around the provision of insurance to cover the childcare workers, as existing policies would only cover them providing care in dedicated creches.

In a letter sent to creche owners and seen by The Irish Times, Minister for Children Katherine Zappone said she had been advised by colleagues in the Department of Social Welfare that “a significant number of [childcare] employees have already presented at Intreo offices throughout the country”.

She said she was considering funding options “for the period beyond March 29th and what conditions may need to apply so that we can best use the public funding available to support the sector during this time”. However, she said key meetings with other departments still needed to take place before she could offer clarity on the future of the sector.