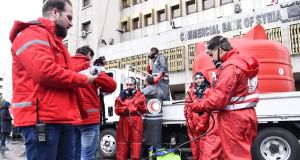 War-devastated Syria, Iraq and Yemen are the three countries in the Middle East most vulnerable to mass coronavirus contagion. The Syrian and Iraqi health systems have been destroyed or degraded by conflict while already poor health services in Yemen, the poorest country in the region, have been wrecked. The hapless citizens of these countries receive little aid from the outside world.

Syria’s government, which controls 70 per cent of the country, has confirmed its first case, a 20-year-old woman who has been quarantined. While the virus spread in neighbouring Lebanon and Iraq, the Syrian government shut borders, locked down citizens and closed schools, restaurants, cafes and parks and suspended conscription into the army.

Prisoners were released. Bakeries were closed to the public and bread is delivered to households to avoid queues. Iranian and Iraqi Shia pilgrimages have been banned but there is concern that contagion could be spread by pro-Iranian militiamen from infected countries who have been deployed with the army in the battle against jihadis and insurgents.

Fearing a massive outbreak, the World Health Organisation (WHO) delivered test kits and protective gear to Syria a month ago but sanctions prevent Syria from acquiring sufficient supplies.

In northeastern Syria, US-backed Syrian Kurdish forces have imprisoned 10,000 Islamic State fighters and hold 70,000 jihadi-linked families in crowded camps. Since infection could become rife in these facilities, the Kurds have released small numbers of Syrian and Iraqi prisoners to tribal leaders.

Iraq is divided between Baghdad-governed provinces and the Kurdish area. The border between the regions and external borders have been closed, and flights within Iraq and from abroad suspended. Schools, universities, and public offices have been shuttered nationwide until April 1st.

Baghdad has confirmed 233 cases, 20 deaths and 57 recoveries but the infection rate could be far higher since only 2,000 have been tested. Shia mass prayers and pilgrimages continue despite a government ban. The Kurdish region reports 76 cases, one death, nine recoveries and more than 2,000 tests.

The national health ministry was refused $5 billion to battle the disease. Collapsing oil prices have deprived Iraq of funds for the anti-virus campaign as it depends on crude exports for 90 per cent of the state budget.

Reeling from five years of war, Yemen is split between the rebel Houthi-held north and the Saudi-sponsored government-run south. A ban on entry to the country has been enforced nationwide. The north, where the majority of Yemenis live, has not only suffered attack from Saudi war planes and pro-Saudi militias but also Saudi sanctions and blockade.

Before the regional emergence of coronavirus, more than 85,000 Yemenis had died from treatable diseases and malnutrition. Saudi crown prince Mohammed bin Salman, who launched the stalemated war, would lose face if he ended it without victory.

The International Committee of the Red Cross reported that the population is “particularly vulnerable” to disease because 80 per cent “lacks food, fuel, drinking water and access to healthcare services”.

As Yemeni women stitch face masks in a factory in Sanaa, Yemenis await a coronavirus catastrophe. WHO representative Altaf Musani said Yemen would face a “perfect storm of a disaster if this virus introduces itself”.