Coronavirus crisis is no time for rookie ministers 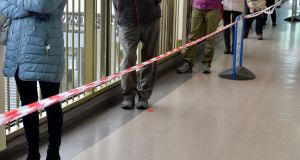 As a country, we are adjusting to heightened anxiety levels. WhatsApp groups of friends and family are trying to maintain spirits. Photograph: Alan Betson

Thursday’s meeting of the Dáil where emergency legislation was passed without a vote indicates that we effectively have a national government in place. Although it is early days, it seems the majority of TDs accept that the current set of Ministers should stay in place. For now.

Talks on government formation are understandably on a go-slow due to the Covid -19 crisis. This has some advantages.

It will allow time for current Ministers to complete work in relation to preparing for long-term ramifications of the crisis and, second, it allows time for the Labour Party and the Greens to consider their position in relation to government formation.

At the beginning of a new government there will also be jostling of egos, positioning for media attention, and an inherent caution

As a country, we are adjusting to heightened anxiety levels. WhatsApp groups of friends and family are trying to maintain spirits and sometimes admitting to spontaneous outbreaks of tears. All the while, people are attempting to do a day job and teach children. Exhaustion abounds.

We are digging deep for humour and, in an Irish way, deriving it from our surroundings. As one wag put it: “Today we live in an Ireland where: the pubs have closed voluntarily; it’s unfashionable to bash the HSE and I would get 100 per cent in the Irish oral – I’m not sure which is the most disconcerting.”

I would add support for the Government and their efforts to this list.

A proposal by the Green Party to have a three-month “crisis government” would be to my mind exactly that – a crisis. The Greens suggested a D’Hondt system, where the three larger parties would get four ministries each with three singular ministries for smaller parties as a solution.

Now is not a time to change the cast of characters who are providing reassurance to the public. In particular, changing our Taoiseach, given his well-received and assuring address to the nation, would not help.

Having worked as a special adviser to a minister, I’ve seen first-hand the early months of a new minister’s role. It is not something easily taken on in a time of crisis.

There is a very steep learning curve involved. The minister is presented with a vast amount of data on a wide variety of policies and initiatives. They are briefed by numerous officials who are experts in various sectors and policies and steer the minister through the first few weeks.

As in any new role, a level of rapport builds over time. In the initial phases, there is a level of “dancing around” each other, the permanent government unsure of what the new regime will bring. As trust builds, civil servants become key members of a joint ministerial team. The relationship with the department secretary general is particularly important – in effect they become a key adviser and confidante to a minister. This is particularly so in the Department of the Taoiseach.

Similarly, working relationships and dependencies develop between the minister’s political advisory team and department officials so that communication barriers and silos are broken down, developing a one-team efficiency. This is what is needed in a crisis.

Despite this specialised support, taking over a ministerial brief even in normal times is daunting, particularly for TDs who will have never been a minister before. It can take many months for a new minister to get into their stride. Add a rapidly evolving crisis to the mix and things can become extremely difficult.

At the beginning of a new government there will also be jostling of egos, positioning for media attention, and an inherent caution and lack of trust, all of which are not helpful now.

If the crisis deepens in relation to social order, will inexperienced ministers for justice and defence add value?

If we were to look at new ministers joining the Cabinet, who will leave? I would argue to change our Ministers for Health and Tánaiste and Minister for Foreign Affairs would be unhelpful to say the least. Even if they remain under the D’Hondt system, replacing the Minister for Finance with his experience of leading through financial recovery is a poor move.

Moving further through the Cabinet, is it appropriate to change the Ministers for Business and Social Protection who are at the rapidly evolving frontline? And if the crisis deepens in relation to social order, will inexperienced ministers for justice and defence add value?

Yes, there are constitutional questions relating to this, but if Covid-19 had hit six weeks earlier they would not arise. Extraordinary times need exceptional measures.

The recent actions of the Dáil were a good step towards maintaining the political stability that is vital at present. Our political leaders must preserve the national approach until the worst of this crisis passes and a course for recovery is set.