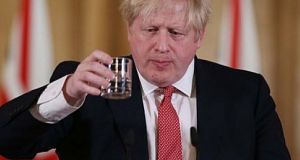 Boris Johnson: ‘To put it simply, if too many people become seriously unwell at one time, the NHS will be unable to handle it.’

Boris Johnson has put Britain under lockdown, limiting people’s movement outside the home, ordering the closure of all non-essential shops and banning gatherings of more than two people in public. In a televised address on Monday night, the British prime minister said the measures were needed to prevent the National Health Service from being overwhelmed by the coronavirus.

“Without a huge national effort to halt the growth of this virus, there will come a moment when no health service in the world could possibly cope; because there won’t be enough ventilators, enough intensive care beds, enough doctors and nurses,” he said.

“And as we have seen elsewhere, in other countries that also have fantastic health care systems, that is the moment of real danger.

“To put it simply, if too many people become seriously unwell at one time, the NHS will be unable to handle it – meaning more people are likely to die, not just from coronavirus but from other illnesses as well.”

He said people would only be allowed to leave their home to shop for basic necessities, to take “one form of exercise a day” alone or with family members, to fulfil any medical need for themselves or someone vulnerable, and to travel to and from work if it cannot be done from home. Police will have powers to enforce the rules, including through fines and dispersing gatherings.

All shops selling non-essential goods, including clothing and electronics stores and other premises including libraries, playgrounds, outdoor gyms and places of worship will be closed immediately. All gatherings of more than two people in public are banned, unless they are of people who live together. And all social events including weddings and baptisms are banned - although funerals will be allowed to take place.

There will be no road closures or restrictions on travel in and out of major cities and public transport will continue to operate, although people are discouraged from using it.

The prime minister was speaking after the death toll from the coronavirus in Britain rose to 335, an increase of 49 from the previous day. Earlier, foreign secretary Dominic Raab told British people travelling abroad that they should return home immediately because border closures and the suspension of flights was making international travel difficult.

MPs were on Monday night set to pass all stages of a bill giving the government sweeping powers to enforce measures to combat the coronavirus.

Meanwhile, in Dublin a Government spokesman said that any decision to follow the British move would only be made on the advice of its public health experts, who have not to date recommended a total lockdown.

The Government’s view is that public compliance with “physical distance measures has generally been good” though acknowledged that “in some cases there is clearly a need to reinforce the message of maintaining an adequate distance, especially for public places,” said the spokesman.

The national public health emergency team has been asked to “consider its latest advice regarding public interactions”, he said and any updated advice would be considered by Ministers when the Cabinet meets on Tuesday.