President of the European Commission Ursula von der Leyen is recommending a gradual, cautious and co-ordinated approach to the lifting of containment measures for EU countries dealing with coronavirus. 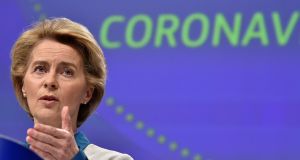 President of European Commission Ursula von der Leyen holds a news conference on the European Union response to the coronavirus crisis at the EU headquarters in Brussels. Photograph: .John Thys/Reuters

The European Commission has published guidelines on how to ease out of lockdown restrictions imposed to curb the spread of coronavirus in a bid to co-ordinate the next steps by the European Union.

The EU’s executive arm is keen to avoid a repeat of the chaotic scenes that ensued last month when member states began closing their borders without coordinating with neighbouring countries, disrupting trade and leaving citizens stranded as they tried to get home.

There is also an awareness that countries that share open borders need to take consistent action against the disease in order for their measures to be effective.

“This roadmap is not a signal that containment measures can be lifted as of now but intends to provide a frame for Member State decisions,” said Commission president Ursula von der Leyen after the launch of the guidelines in Brussels.

Borders between member states should be open if conditions on either side of the border are comparable, but the commission has recommended that non-essential travel outside the EU should continue to be restricted, and be subject to review.

The guidelines recommend that any decision to ease restrictions should be based on evidence that there has been a sustained drop in cases, and should only be done if countries have the capacity to monitor whether infections increase and if their healthcare systems have the ability to cope if the disease bounces back.

The paper notes that an increase in infections is inevitable once restrictions are eased, and that lockdowns may need to be re-imposed if the disease begins to spread.

“A gradual rollback of confinement measures will unavoidably lead to an increase in new cases of infection with the coronavirus and a possible reintroduction of restrictive measures,” it reads.

The guidelines set out a suite of measures that would allow any further outbreaks of the disease to remain localised, meaning blanket national lockdowns could be replaced with targeted regional measures.

The commission believes that the only permanent way out of the crisis is the development of a vaccine, and has encouraged all states to help-fast track development. made funding available to help scientists find one, and to develop effective treatments of the disease in the mean time.

The EU’s next long-term budget will raise funds to sponsor economic recovery after the coronavirus pandemic, said European Council president Charles Michel. He said leaders and governments will discuss a reworking of plans for the 2021-27 EU joint budget during a videoconference summit on April 23rd.

Ms von der Leyen said the next European budget “has to be the European answer to the corona crisis.

“A European budget that with all its might is able to leverage the necessary money for a huge investment initiative ... in order to really restart the economic process,” she said.