US fatalities rise above 30,000 as European leaders consider easing lockdowns

President of the European Commission Ursula von der Leyen is recommending a gradual, cautious and co-ordinated approach to the lifting of containment measures for EU countries dealing with coronavirus. 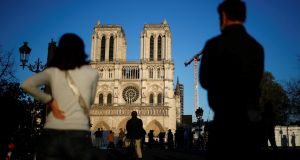 People listen to the Notre-Dame de Paris Cathedral’s great bell ringing, one year after a devastating fire at the building. Photograph: Gonzalo Fuentes/Reuters

France recorded another 1,438 coronavirus-related deaths on Wednesday, a record rise reported by the health authority since the pandemic began.

Deaths linked to the virus rose to 17,167, director general for health Jérôme Salomon said at a briefing in Paris. He said the toll did not cover a 24-hour period, as the count included fatalities in recent days that were not previously reported. The number of reported infections in France rose by 4,560 to 147,863 cases.

The number of people hospitalised in France due to the virus, also known as Covid-19, fell for the first time since the start of the outbreak, Mr Salomon said. Patients in ICU beds, an indicator of outbreak’s intensity and its impact on the country’s hospital system, fell by 273 to 6,457, the lowest since April 2nd, according to health ministry data posted online.

The ministry said 1,767 mariners, nearly all from the Charles de Gaulle itself, had been tested and results showed at least 668 to be infected. Results are still not in from one-third of the tests.

“Thirty-one personnel are today in hospital,” the ministry said in a statement. “More tests are being carried out.”

The carrier, which had most recently been taking part in exercises with northern European navies in the Baltic Sea, arrived home in Toulon two weeks earlier than expected after about 40 crew members showed signs of Covid-19 symptoms.

Sick crew members had been placed under strict medical observation on board the nuclear-powered carrier and a team equipped to carry out the first tests airlifted to the vessel.

The navy chief had ordered an investigation, the ministry said.

Cycling teams are gearing up for the Tour de France to be held in August rather than the usual July, after French president Emmanuel Macron said big public events would be halted until mid-July.

The UK reported a further 761 coronavirus-related deaths in hospitals on Wednesday as the government faces a backlash over its handling of the growing crisis.

Some 12,868 patients have died in hospital after testing positive for coronavirus in the UK as of 5pm on Tuesday, the British department of health said, up by 761 from 12,107 the day before.

The government announced on Wednesday that all care home residents and staff with symptoms of Covid-19 are to be tested.

The announcement came as Labour leader Keir Starmer added his voice to calls for ministers to publish their lockdown exit strategy, saying people need to see “light at the end of the tunnel”.

In a letter to Dominic Raab, who is deputising for prime minister Boris Johnson, Mr Starmer said Labour would support the government if, as expected, it keeps the current measures in place.

But he said: “The question for Thursday therefore is no longer about whether the lockdown should be extended, but about what the government’s position is on how and when it can be eased in due course and on what criteria that decision will be taken.”

The Government has come under intense scrutiny over what is happening in care homes after providers said official figures on deaths do not match what they are seeing on the ground.

Prof Martin Green, chief executive of Care England, which represents independent social care services, said there have been thousands of cases and deaths in care homes, while HC-One, Britain’s biggest care home operator, said two-thirds of its homes are affected and it has seen more than 300 deaths.

The Department of Health and Social Care has said there have been reports of Covid-19 in 2,099 care homes in England.

Data from the Office for National Statistics shows there were 217 deaths linked to Covid-19 in care homes between the start of the year and April 3rd.

The European Commission published guidelines on how to ease restrictions on movement in a bid to co-ordinate the next steps by the European Union.

The guidelines recommend that any decision to ease restrictions should be based on evidence that there has been a sustained drop in cases, and should only be done if countries have the capacity to monitor whether infections increase and if their healthcare systems have the ability to cope if the disease bounces back.

Spain has begun reopening its locked-down economy this week as the number of deaths reported each day has fallen.

Officials hope that more testing will give a better indication of the areas in the country where lockdowns can be eased further.

“Spain is already one of the countries making the most daily tests. More than 20,000, and we are increasing the number,” prime minister Pedro Sanchez told a near-empty parliament.

Spain’s daily number of deaths from the coronavirus fell on Wednesday to 523 from 567, the health ministry said – well below a peak of 950 reached on April 2nd.

Austria and Italy have also begun to slowly lift restrictions while Germany will consider relaxing restrictions next week on shops introduced last month while keeping social distancing rules in place until May 3rd, according to a government proposal.

Chancellor Angela Merkel began discussing the draft during talks with the governors of Germany’s 16 states on Wednesday to agree whether and how to loosen some of the restrictions given an improvement in the situation.

The proposals include reopening schools gradually starting May 4th with priority given to primary and secondary pupils in final years, while daycare centres will remain shut. Schools must prepare a hygiene plan before they reopen their doors.

But retailers whose shops are up to 800sq m as well hairdressers, zoos, and public libraries will be allowed to open next week under strict social distancing and hygiene rules.

The proposals do not include making face masks compulsory in public.

Germany’s confirmed coronavirus cases have risen by 2,486 to 127,584, the Robert Koch Institute for infectious diseases said earlier, with a reported death toll of 3,254 people.

The death toll in Italy rose by 578 on Wednesday, down from 602 the day before, while the number of new cases slowed to 2,667 from a previous 2,972, continuing the recent downward trend.

US deaths from the coronavirus topped 30,000, as officials debated how to reopen the economy without reigniting the outbreak. US president Donald Trump halted funding to the World Health Organisation, drawing condemnation from infectious disease experts.

New York City revised its official Covid-19 death toll sharply higher to more than 10,000, to include victims presumed to have perished from the lung disease but never tested.

Canada’s economic shutdown will last for weeks more to ensure that measures to fight the coronavirus are working, prime minister Justin Trudeau said, while the country’s death toll exceeded 900.

Nurses at a public hospital hit by Mexico’s worst coronavirus outbreak were told by their managers not to wear protective masks at the start of the epidemic to avoid sowing panic among patients, nurses and other medical workers said.

There have been 126 confirmed cases of the coronavirus among oil and gas workers in Brazil, including 74 people who were recently on offshore oil platforms. – Agencies