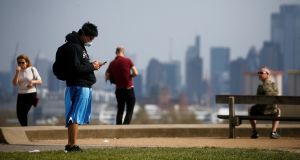 Chancellor of the exchequer Rishi Sunak has warned that the British government will not be able to protect every business and every household during the Covid-19 pandemic and that there will be more “tough times” ahead.

Analysis of the potential economic impact of the coronavirus lockdown by Britain’s fiscal watchdog suggested the UK economy could fall off a cliff edge, potentially shrinking 35 per cent between April and June while unemployment surges by more than two million.

In its first estimate of the economic toll taken by the crisis, the Office for Budget Responsibility said unemployment could hit 3.4 million, leaving about one in 10 of the working population without a job.

Addressing the report, which is a scenario-based analysis and not a forecast, Mr Sunak told the daily Downing Street press conference that had the government not taken the actions it had, “the situation would be much worse”.

“These are tough times and there will be more to come,” he said. “As I have said before, we cannot protect every business and every household.

“But we came into this crisis with a fundamentally sound economy, powered by the hard work and ingenuity of the British people and British businesses. So while those economic impacts are significant, the [Office for Budget Responsibility] also expects them to be temporary, with a bounceback in growth.”

The office based the outlook on a scenario where the lockdown lasts three months followed by a partial lifting for three months. But the independent forecaster believed, in this case, there will be a sharp bounceback in the economy.

The analysis came as new figures showed more than one in five deaths being recorded in England and Wales were linked to coronavirus.

Data from the Office for National Statistics shows Covid-19 was mentioned on 3,475 death certificates in the week ending April 3rd, including hospital, care home and community deaths.

This means coronavirus has pushed the death toll in England and Wales to its highest level since official weekly figures began in 2005.

And the health department said 12,107 patients had died in hospital after testing positive for the virus in the UK as of 5pm on Monday, up 778 from the previous day’s total, while confirmed cases reached 93,873.

It was also reported that Simon Stevens, chief executive of NHS England, had suffered from coronavirus. The BBC said Stevens had self-isolated for just over a week.

The official figures showed that, in the week to April 3rd, some 16,387 people died in England and Wales, an increase of 5,246 deaths compared with the previous week and 6,082 more than the five-year average.

But care home providers have warned they are seeing a higher number of cases and deaths than are officially reported, in part due to a time lag with the figures.

MHA, a charitable operator, said there had now been 210 deaths across 131 of its homes, with outbreaks in about half of them. And about two-thirds of care homes run by Britain’s largest care home operator, HC-One, have seen cases of Covid-19.

The department of health said on Tuesday there had been coronavirus outbreaks at 2,162 care homes in England.

The official figures show that around one in 10 of all deaths involving Covid-19 now occur outside hospitals. From 406 such deaths recorded since January, 217 took place in care homes, 33 in hospices and 136 in people’s own homes. – PA