Bill Gates: We need a global response to Covid-19 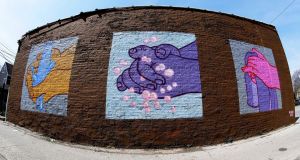 Over the past few weeks, I’ve spoken to dozens of experts about Covid-19, and there’s clear evidence that the disease does discriminate in a few ways: it kills the old more often than the young, men more often than women, and it disproportionately impacts the poor.

But here’s something I’ve seen no evidence of: Covid-19 discriminating on the basis of nationality. The virus doesn’t care about borders.

I mention this because since the world became aware of the virus early January, governments have focused on their own national responses – how can they protect the people living inside their borders? And that’s understandable. But with such an infectious and widespread virus, leaders must also recognise that so long as there is Covid-19 somewhere, it concerns people everywhere.

Covid-19 hasn’t yet hit many low- and middle-income countries hard. We’re not exactly sure why. But what we do know is that the disease will eventually spread widely in these nations, and without more help, the caseloads and death tolls will likely be worse than anything we’ve seen so far. Consider this: Covid-19 has overwhelmed cities such as New York, but the numbers suggest that even a single Manhattan hospital has more intensive-care beds than most African countries. Millions could die.

You don’t have to live in a developing country to worry that this might impact you. Even if wealthy nations succeed in slowing the disease over the next few months, Covid-19 could return if the pandemic remains severe enough elsewhere. It is likely only a matter of time before one part of the planet reinfects another.

This is why we need a global approach to fighting this disease. What that looks like will surely change as the pandemic evolves. But there are at least three steps world leaders – particularly those in the G20 – can take right now.

The first is making sure the world’s resources for fighting this pandemic are allocated effectively – things such as masks, gloves and diagnostic tests. Eventually, we hope there will be enough for everyone. But while the global supply is limited, we need to make hard choices in smart ways. Unfortunately, right now, that is not always happening.

There are some things leaders are starting to agree on – for instance, that frontline health workers should be tested first and receive priority access to personal protective equipment. But think about the choices we’re making on a bigger scale: how are those masks and tests being distributed in one community or nation versus another? Right now, the answer often comes down to a troubling question: who’s the highest bidder?

I’m a big believer in capitalism – but some markets simply don’t function properly in a pandemic, and the market for life-saving supplies is an obvious example. The private sector has an important role to play, but if our strategy for fighting Covid-19 devolves into a bidding war among countries, this disease will kill many more people than it has to.

We need to deploy resources based on public health and medical need. There are many veterans of the Ebola and HIV epidemics who can help craft guidelines to make this happen, and leaders of both developed and developing nations should work with the World Health Organisation (WHO) and its partners to put them on paper. Then, all of the participating nations should agree to the guidelines publicly, so everyone is held accountable. These agreements will be especially important once a Covid-19 vaccine finally becomes available, because the only way we can completely end this pandemic is by immunising people against it.

That brings me to the second thing leaders must do: commit the necessary research and development funding to develop a vaccine.

There have been very few positive stories about Covid-19, but one is the science. Three years ago, our foundation, the Wellcome Trust and various governments launched the Coalition for Epidemic Preparedness Innovations – or CEPI. The goal was to speed the process of testing vaccines and to fund new, faster ways of developing immunisations in the first place. If a novel virus were to start spreading around the world, we wanted to be ready.

CEPI is already developing at least eight potential vaccines for Covid-19, and researchers are confident they’ll have at least one ready within 18 months. That would be the fastest humans have ever gone from seeing a brand new pathogen to developing a vaccine against it.

This timeline, however, depends on funding. Many nations have contributed to CEPI within the past two weeks, but the coalition needs at least $2 billion for their work. That’s only a rough number – innovation is an unpredictable business – but the G20 leaders should make meaningful pledges now.

They should also recognise this funding is just to develop the vaccine – and not to manufacture or deliver it. That will require even more money and planning. This is the third task the G20 should start thinking about.

For one thing, we aren’t sure which vaccines will be the most effective yet, and each requires unique technology to make. That means nations need to invest in many different kinds of manufacturing facilities now, knowing that some will never be used. Otherwise, we’ll waste months after the lab develops an immunisation, waiting for the right manufacturer to scale up.

Another important consideration is the cost: if the private sector is willing to step up and manufacture this vaccine, for example, they shouldn’t have to lose money to do it. At the same time, any Covid-19 vaccine must be classified as a “global public good,” and remain affordable and accessible to all. Fortunately, there are organisations such as Gavi, the Vaccine Alliance, which has a long history of helping low- and middle-income nations get access to critical immunisations.

Over the past two decades, Gavi has worked with the WHO and Unicef to introduce 13 new vaccines, including the Ebola vaccine, to the world’s 73 poorest countries. They are willing and able to do the same with a Covid-19 vaccine – but they, too, need more funding. Specifically, Gavi will need $7.4 billion over the next five years – and that’s just to maintain its current immunisation effort. Delivering a Covid-19 vaccine will cost even more.

These multibillion-dollar price tags may seem like a lot of money – especially at a time when entire economies are slowing to a halt. But they’re nothing compared to the cost of a botched immunisation effort and a longer outbreak.

Humanity, after all, isn’t just bound together by common values and social ties. We’re also connected biologically, by a microscopic network of germs that links the health of one person to the health of everyone else.

In this pandemic we are all connected.

Our response must be, too.

1 Donald Trump directs team to co-operate on Biden transition
2 Alison Curtis: My guilt at not going for a second pregnancy
3 Exiting Level 5: Ministers to push for reopening of shops, restaurants and churches next week
4 How to gift your child a house deposit . . . tax free
5 Covid-19: Hairdressers, gyms and religious services could return next week
Real news has value SUBSCRIBE