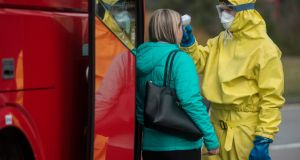 The European Union has urged member states to implement health screening at their borders to halt the spread of the coronavirus.

Increasing concern about the spread of the illness, also known as Covid-19, has tested one of the core principles of the EU — freedom of movement — with countries bordering Italy restricting traffic from outside.

Several other EU nations have also brought in restrictions which go beyond travellers from Italy, which has seen the most virus cases and deaths outside China.

“Certain controls may be justified, but general travel bans are not seen as being the most effective by the World Health Organisation. Moreover, they have a strong social and economic impact. They disrupt people’s lives and business across the borders.”

To avoid a patchwork of national policies that cause economic harm and are ineffective in guarding public health, “any measure that is taken must be proportionate” and co-ordinated with Brussels, she said.

Nevertheless, a number of countries have already increased restrictions.

Poland’s prime minister opted to close the country’s borders with all its neighbours and all foreigners are denied entry unless they live in Poland or have personal ties there.

Slovakia has taken similar action, and Denmark closed all its land, sea and air borders on Saturday. Travellers will be turned away at the border unless they can show that they have “a legitimate reason” to be there.

The Czech Republic has ordered retail businesses including shopping centres to close from Saturday morning, except for those providing essential services such as supermarkets, petrol stations and pharmacies.

More than 22,000 cases of Covid-19 have been confirmed across Europe, and nearly 1,300 people with the virus have died on the continent.

Preliminary checks for signs of infection could be done at borders between the 26 nations that make up the passport-free Schengen Area, but also at the EU’s external borders and within individual countries, Ms von der Leyen said.

The ID check-free area, which includes many EU members but also non-members like Switzerland, Norway and Iceland, is a jewel in Europe’s crown. Neither Ireland nor the UK are included in the area.

Besides smoothing travel arrangements, it allows businesses and transport to move easily across borders of the countries in the zone.

“Member states, especially neighbouring ones, need to work very closely together,” she said.

“In this way, and it’s the only way, we can make sure that our citizens receive the health care that they need immediately wherever they are.”

The European Commission polices the Schengen Area’s rules, but individual countries are responsible for their own health and public safety policies.

“The problem is on different levels in different countries,” Swedish interior minister Mikael Damberg told reporters. “We hope that all countries that take new measures also inform other European countries.

“The transportation system must work when it comes to food and to health care materials and these kinds of things that are important to all European countries so that we don’t make problems for each other handling the crisis.”

Croatian interior minister Davor Bozinovic said: “This crisis shows that as a European Union we need to have models to act in a more co-ordinated way.

“If we are acting in one way, it would be much better for all of us.”-AP