Coronavirus: Second death in Republic as US extends travel ban to Ireland

US president Donald Trump has extended his country's travel ban to include Ireland and the United Kingdom. Video: The White House 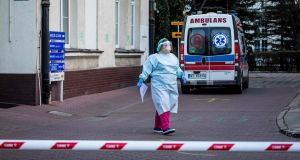 A medical staff, wearing a protective outfit, walks on a parking at an infectious hospital in Warsaw. Photograph: Wojtek Radwanski/AFP via Getty Images 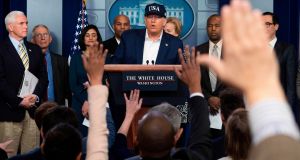 US President Donald Trump takes questions from reporters during a press briefing about coronavirus . Photograph Jim Watson/AFP via Getty Images 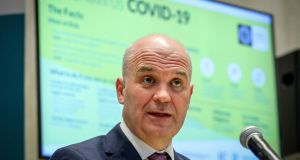 Dr Tony Holohan, Chief Medical Officer, answers questions at a media briefing in the Department of Health where he issued updates on the Covid-19 cases in Ireland.Photograph by Crispin Rodwell for the Irish Times

A male patient has become the second Covid-19-related death in the Republic. The fatality comes after 39 new cases were announced on Saturday evening, bringing total infections in the State to 129.

The person who died, a male in the east of the country, had an underlying condition. Dr Tony Holohan, the chief medical officer, extended his condolences to the family and friends of this person.

The new cases are among 21 males and 10 females. Some 21 are associated with the east of the country, 13 the south, three in the North West, and two in the west.

The chief medical officer, Tony Holohan, delivered a strong warning about compliance with social distancing measures following anecdotal evidence that activity in pubs and restaurants would suggest recommendations are not being observed.

“There are a lot of anecdotal reports of busy restaurants and pubs. It’s important to get the message out. Listen to the message, take personal responsibility… reduce as much as possible social activity.”

Meanwhile Ireland and Britain have been added to the United States’ travel ban, with the restrictions taking effect from 4 am Tuesday morning (midnight US time).

Speaking in the White House, vice-president Mike Pence announced the decision to expand the list, after US president Donald Trump implied at a press conference on Friday that he could do so.

Mr Trump also confirmed that he had been tested for the coronavirus, as he took to the podium at the White House press room in Washington.

Under the restrictions, American citizens, green card holders and others are still allowed to return home to the US — but will be funnelled to 13 airports and be subjected to health screenings and quarantine orders, according to reports.

Acting Homeland Security Chief Chad Wolf said the president had “made the decision due to the rising number of cases in the UK to apply these restrictions to both the UK and Ireland, so as we move forward again, these restrictions bar travel for certain foreign nationals who have been present in the UK or Ireland in the past 14 days.”

He added: “to be clear, the president’s proclamation and these travel restrictions do not apply to US citizens.”

Meanwhile France announced on Saturday it will shut most shops, restaurants and entertainment facilities from midnight on Saturday and people should stay home as much as possible as the spread of coronavirus is accelerating. Prime minister Edouard Philippe announced was speaking at a news conference after the public health authority said 91 people had died in France and almost 4,500 were now infected. “I have decided to close all non-indispensable locations, notably cafes, restaurants, cinemas, nightclubs and shops,” he said. “We must absolutely limit our movements.”

Earlier Minister from the North and the South of Ireland met in Armagh on Saturday. Northern Ireland for the moment will continue to diverge from the Republic on how to address the coronavirus emergency, it became clear after the meeting .

While the Taoiseach Leo Varadkar, who also attended the meeting, said coronavirus “did not recognise borders” the DUP First Minister Arlene Foster and the Sinn Fein Deputy First Minister Michelle O’Neill held to opposing views on whether schools, universities and childcare facilities should be closed in Northern Ireland, as happened in the South.

Mr Varadkar said it was inevitable there would be differences in approach to tackling the crisis between the North and South. “But the differences that exist are mostly around timing,” he added.

“What there isn’t any difference about is our common objective, which is to slow down this virus in its tracks and push it back as much as possible and limit the harm to human health and human life.”

In Britain, the government is expected to introduce emergency laws next week to ban mass gatherings in an attempt to curb the coronavirus outbreak, an escalation of its crisis plan that critics had said was too relaxed.

British prime minister Boris Johnson has so far resisted pressure to take some of the stringent measures adopted by other European countries to slow the spread of the virus.

“We have drafted emergency legislation to give the government the powers it needs to deal with coronavirus, including powers to stop mass gatherings and compensate organisations,” a government source said.

Health authorities in England announced on Saturday a further 10 deaths caused by coronavirus, almost doubling the number of fatalities in Britain since Friday.