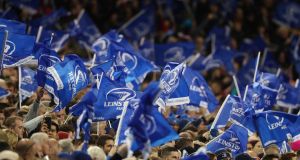 Leinster will be the province to be hit the hardest should the run in to the season be hit by games held behind closed doors or not at all. Photograph: Billy Stickland/Inpho

The decision by the LNR (Ligue Nationale de Rugby) to postpone all Top 14 and Pro D2 matches until April 30th effectively means the Heineken Champions Cup quarter-finals between Toulouse and Ulster, and Clermont and Racing cannot be played in mid-April.

Although English championship games will go ahead this weekend, Premiership Rugby is bound to follow suit and postpone games before its scheduled resumption next weekend. Hence, the likelihood is that the Leinster-Saracens and Exeter-Northampton ties will follow suit amid the ever increasing probability that the 2019-20 rugby season is all but over due to coronavirus.

The IRFU has already taken a huge hit financially, with the estimated loss of €3 million in gate receipts from the postponed Six Nations game against Italy. This is compounded by the incomplete tournament which means the prize money from the Six Nations will not be included in the IRFU budget for the financial year.

The union budgets for a third-place finish in the Six Nations, which equates to roughly €3 million. No less than the organisers and the six competing federations and unions (all of whom have had games postponed after Saturday’s Wales-Scotland match fell the way of the other round-five games), the IRFU will be desperate for them all to be played eventually.

The union underpins the four provinces, paying all of the salaries of those players on central contracts and underpinning those on provincial contracts. The provinces are facing a huge financial hit themselves.

Here in Ireland the Government’s recommendation that gatherings of more than 500 people at outdoor events should be cancelled until March 29th prompted the Pro 14 organisers to postpone their tournament indefinitely. There’s no telling when, if at all, the Pro 14 or the rugby season will resume.

As for the Champions Cup and European Challenge Cup, last Monday the organisers, EPRC, stated its desire to complete their tournaments. However, in keeping with the rapidly changing narrative that already seems like an age ago.

However, akin to the Pro14 they oversee cross-border tournaments, and so the EPRC has to comply with the guidelines from government and health authorities, as well as the wishes of the respective federations, unions and competing clubs.

EPRC would ideally wish to complete its tournaments for they cannot be pushed back into next season. The most viable option appears to be having the remaining knock-out games played behind closed doors, but the odds are even against this happening.

All of this is against the backdrop of how teams can keep training and to what degree they will be able to train together. Once coronavirus starts infiltrating playing squads then the prospect of the 2019-20 season being declared null and void seems inevitable.

Leinster will be the province to be hit the hardest should the run in to the season be hit by games held behind closed doors, or not at all. This is because Leinster have secured the single most lucrative game of the season for any team across the three major leagues in Europe by dint of securing a home quarter-final in the Heineken Champions Cup against Saracens three weeks’ hence, and ditto Toulouse, Clermont and Exeter.

This is bonus territory, where the home side is incentivised to play a home quarter-final away from their customary home and to a bigger stadium by receiving a 65 per cent share of the gate receipts after costs rather than 50 per cent and is not part of the annual budget.

Since the 2002-03 season, Leinster had previously earned nine home quarter-finals in the competition, with this upcoming game against Saracens their fourth in a row. This serves to demonstrate how valuable it has been in the province’s ability to remain the leading Irish team while being competitive against privately-backed French and English clubs.

A full house would generate in the realm of €1.3 million. Allowing for the hiring of the Aviva Stadium from the IRFU (the fee is estimated to be around €300,000) and other costs, Leinster could have expected a return well above €500,000 from a 50,000 sell-out.

However, Leinster’s losses won’t stop there if the suspended Pro 14 is ultimately abandoned altogether, or even if games are played behind closed doors.

On April 18th, Leinster are scheduled to play their most lucrative game of the season when hosting Munster at the Aviva Stadium in the Pro 14. Unlike a Heineken Champions Cup quarter-final, Leinster would keep all the gate receipts from a game against Munster, which normally would yield €1 million or so, and this is part of their annual budget.

Leinster would also keep all the gate receipts from their Pro 14 matches at the RDS against Zebre (already suspended) on April 11th, and the Cardiff Blues, while another Pro 14 home semi-final in front of an 18,000 capacity crowd at the RDS would probably earn them in the region of €500,000.

In total, therefore, Leinster could miss out on a return of close to €2.5 million.

Logistically Leinster would have huge difficulties in preparing for a home quarter-final against Saracens event if it went ahead at some unspecified date in the future. With their upcoming two-game trek to South Africa now postponed, even if the quarter-final were to go ahead it would be five weeks since their last game, at home to Glasgow, and six weeks since Johnny Sexton, James Ryan and the rest of their Irish squad members last played against England at Twickenham. Now it could be a matter of months without a game.

That was why Leinster had revised their plans for the South African leg of their season to bring some of the latter contingent to Bloemfontein for the first of those games against Cheetahs.

All that said and done, in the highly unlikely event of Covid-19 being contained sufficiently for the quarter-finals to eventually go ahead, the lack of game time would be an inconvenience they and everyone else would happily take. But it seems highly unlikely now.

The province’s upcoming games away and at home to Benetton had already been postponed, and with little prospect of them being rescheduled before the end of the season, in which case they will be declared 0-0 draws.

Benetton are effectively in lockdown, and the feeling within rugby circles is that both they and Zebre are unlikely to play again this season given the coronavirus crisis in Italy.

Even in the unlikely event of this season’s Pro 14 being resumed, the probable cancellation of the two Benetton games in itself would damage Munster’s chances of overtaking Edinburgh at the top of Conference B and achieving their goal of a home semi-final following on from their elimination at the group stages of the Heineken Cup this season.

A Pro 14 home semi-final would not only have been lucrative, potentially earning the province in the region of €500,000 in gate receipts, but would also have earned them a better seeding in the draw for next season’s Heineken Champions Cup, having learned the consequences of not doing so when drawn in a group along with holders Saracens and Racing 92 this season.

Of course all of that could yet be immaterial if the Guinness Pro 14, Top 14 and Premiership are not completed, creating all sorts of difficulties with regard to qualification and seeding for next season’s European competitions.

As it is Munster have three more scheduled games at home, the first of which against Cardiff on April 11th would be their first game in six weeks, and a first in seven weeks for Peter O’Mahony, CJ Stander, Conor Murray and their other Irish squad members who featured against England.

Their other scheduled home games of Glasgow (April 25th) and Connacht (May 30th) were, like the Cardiff match, scheduled for Thomond Park.

Were they not to go ahead, or be played behind closed doors, Munster would miss out on potentially another €1 million to €1.5 million.

The indefinite suspension of the Pro 14 means that in addition to their postponed trek to Benetton three weeks ago, Ulster’s upcoming games at home to the Dragons and in Glasgow will assuredly follow suit.

Hence their next match was to have been their Heineken Champions Cup quarter-final away to Toulouse on Sunday, April 5th. This would have been their first game since the 20-10 win over the Cheetahs on February 22nd, a gap of six weeks, but, as with everyone else, now there is no resumption in sight.

Financially, that quarter-final in front of a full house in Le Stadium would have been worth 35 per cent of an estimated €500,000 in gate receipts, a figure in the region of €175,000.

Ulster also have another three Pro 14 games scheduled to take place in the Kingspan Stadium, against Edinburgh, Glasgow and Leinster, which is usually a full house, which could be worth roughly €1 million to €1.5million to the province’s coffers.

Furthermore, they would have been eyeing up a profitable home semi-final, which could conceivably have buttressed their income by a further €500,000.

Connacht’s upcoming and seemingly defining game against the Scarlets, the third-placed team in Conference B whom they trail by just two points, at the Sportsground next Friday has fallen the way of their Pro 14 encounter away to Zebre eight days later.

Thus, in the improbable event of things returning to anything like normality after the shutdown until March 29th, Connacht’s next scheduled game is at home to Glasgow – always a well-attended fixture – on April 10th.

As well as games away to Benetton (likely to be called off), Cardiff and Munster, Connacht have two further home games, against Ulster on April 25th and Edinburgh on May 16th. So while the cost to them would have been less than for the other provinces, these things are relative.

The financial implications will be just as damaging, and all of this trickles back up to the IRFU, who in addition to Six Nations losses, could now miss out on rent hires of the Aviva Stadium as well as the returns in prize money from EPRC and the Pro 14.

It is a vicious financial circle running into millions.