Coronavirus: HSE advises parents to carry on having play dates for children 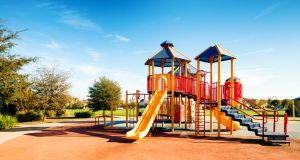 The Health Service Executive (HSE) has reiterated its stance that there is no need for parents to have a complete ban on play dates.

It comes as playgrounds across Dublin were closed due to concerns over coronavirus. It follows the closure of all schools and childcare facilities .

The advice would appear to be contrary that given by a number of medics who have said there should be no interaction between children from different families over the next fortnight.

In a statement issued on Saturday, the HSE said “people have to live their lives, children have to play”.

It recommended again that children and adults should wash their hands regularly, but it stopped short of recommending that play dates should be stopped.

The HSE said: “It would be advisable to limit the number of children attending if you are organising a play date.

“Teach your children how to interact, coughing etiquette and how to wash their hands properly. If a child is sick they should not attend a play date or visit older relatives.

The National Public Health Emergency Team (NPHET) is currently working up comprehensive guidance for parents which will be posted on the HSE website.

At a briefing on Saturday the State’s chief medical officer said: “We are aware in some parts of the country playground have closed, but I think our advice and guidance, and we need to be clear about this in terms of the advice and guidance we’ve made available through our website and continue to make available to parents, that in small numbers those kind of social experiences and exercise experiences for children may still be appropriate.”

Dublin City Council has decided to close all of its children’s playgrounds in a bid to stop the spread of coronavirus.

The council “revised” an earlier decision to keep many playgrounds in its area open after concerns were raised by councillors.

A spokeswoman for the council said the original decision had been not to shut playgrounds, but to instead place a sign up asking users to “ensure hands are sanitised/washed thoroughly after using the playground”.

This was due, she said, to practical difficulties in preventing access to many playgrounds. However, they will now officially be closed even though these difficulties remain in many cases.

The u-turn comes after concerns were raised when councillors were told it was “not possible” to close playgrounds operated by the Council, while other local authorities have closed such facilities in an effort to stop the spread of the coronavirus.

According to an email sent to current Dublin City Council Lord Mayor Tom Brabazon by Fine Gael councillor James Geoghagan on Friday night, the chief executive of the council has said it is “not possible” to close all playgrounds.

In the email, which was copied to all councillors and has been seen by The Irish Times, Cllr Geogrhan wrote: “I wrote the Chief Executive this morning inquiring as to whether DCC playgrounds would be shut and I was told that this had been looked at within (the) Parks (department) but was not possible to to do with all playgrounds and that signage was being looked at.”

Cllr Geoghegan, who represents the Pembroke area of the South City, said that the official medical advice is that children should not be taken to playgrounds “but this is not being adhered to or is advice that may not be known by parents”.

“DCC should announce before tomorrow morning that all their playgrounds are closed and erect signage or lock gates where possible without preventing access to Parks which is essential for people to safely recreate.”

He warned: “The more congregating of children in playgrounds, the greater the likelihood of the virus spreading and negating some of the objectives of the school closures.”