Coronavirus crisis could last up to four months, says Spain

Madrid worst affected area as total cases rise to over 2,100 and 10 deaths on Wednesday alone 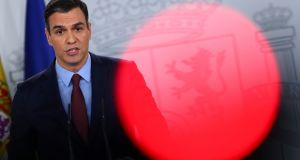 Spanish prime minister Pedro Sanchez speaks during a news conference on Tuesday: he said the economic impact of the virus will be ‘serious and heavy but also temporary’. Photograph: Sergio Perez/Reuters

Spain’s government says it expects the coronavirus crisis to last up to four months as it struggles to bring the virus’s rapid spread under control.

The government said on Wednesday that just over 2,100 people were infected and 49 had died across the country from Covid-19. Around half of cases are concentrated in the Madrid region, which has seen 31 deaths, 10 of them reported on Wednesday alone.

Fernando Simón, head of medical emergencies, laid out the government’s timeframe regarding how long the virus is expected to continue spreading.

“If everything goes well we should expect a best-case scenario of 1½ to two months [more], but it might last two, three, or four months in a worst-case scenario,” he said.

Coronavirus’s spread across Madrid and in the northern provinces of La Rioja and Vitoria has been of particular concern.

A barrage of new measures was introduced on Wednesday in those parts of the country. All schools and universities were closed, for a minimum of two weeks, a measure affecting more than 1.5 million students. Employers were encouraged to allow staff to work from home in order to accompany school-age children and to reduce the risk of contagion in workplaces.

In the capital, sports centres, theatres and public libraries were also closed.

Although Covid-19 has spread across the country, most areas have seen relatively few cases and are not facing such rigorous measures. However, the government has recommended that all Spaniards avoid travel where possible and that the elderly and those who have existing health problems avoid using public transport. Meanwhile, flights from Italy have been cancelled.

Sports events are still going ahead in many cases, although behind closed doors, and as of Wednesday evening top-flight football games were scheduled to go ahead although non-professional games were cancelled.

In the north of the country, the governments of the Basque and Galician regions are considering postponing local elections scheduled for April 5th.

On Tuesday, the Socialist prime minister Pedro Sánchez said that the economic impact of the virus will be “serious and heavy but also temporary”. He pledged to offer extra credit lines to smaller businesses affected by the crisis. Mr Sánchez’s coalition government is planning to unveil further details of economic measures on Thursday.

The IMF has suggested that Spain should hold off on implementing deficit cuts in order to ensure that the healthcare system is fully equipped to deal with the challenges of coronavirus.

The economic impact of the crisis started to become apparent when local authorities in the Mediterranean city of Valencia reported that the cancellation of the annual Fallas festivities in the city will cost an estimated €700 million due to lost tourism revenues.

“Now we don’t know what will happen,” said Rafael Mengó, president of an association that organises the festivities. “This is a total disaster.”

There was some panic buying in supermarkets in Madrid, with products such as toilet paper, milk and tinned goods running short in many stores.

The former government minister Ana Pastor has revealed that she has tested positive for coronavirus. The deputy leader of the far-right Vox party, Javier Ortega Smith, has also been infected.