US President Donald Trump has declared a state of emergency, as the number of cases of coronavirus continued to rise in the United States and criticism mounted over the lack of adequate testing in the country. Video: The White House 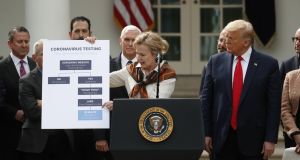 US President Donald Trump has warned that Britain “and a couple of other” countries could be added to America’s travel ban list, noting the rise in coronavirus cases in Britain in recent days.

Asked why he had decided to omit the country from the original travel ban announced on Wednesday, given that several Schengen countries have fewer cases than the UK, Mr Trump said he had been advised to do so by experts. However, he said he could change this position, and add some countries and remove others from the list. “We’ll be taking another look at that, absolutely,” he said.

On Wednesday, Mr Trump announced a curb on travel restrictions from Europe to America that were scheduled to go into effect last night. The announcement took European countries by surprise, and it later emerged that non-Schengen countries, like Britain and Ireland, were not included.

It is not clear if the Trump administration is reassessing its decision to exempt Ireland from the list.

The new development emerged as Mr Trump declared a state of emergency, as the number of cases of coronavirus continued to rise in the United States and criticism mounted over the lack of adequate testing in the country.

Speaking at a press conference in the White House, Mr Trump said that the United States had implemented a “very vigilant effort to combat and ultimately defeat the coronavirus.”

“We have been working very hard on this, we’ve made a lot of progress,” he said.

“When you compare this with has been done in other parts of the world it is pretty incredible.”

Mr Trump’s declaration of a national emergency opens up a range of options for the federal government to respond to the public health crisis, including allowing FEMA – the Federal Emergency Management Agency – to intervene and provide emergency help to regions in need. $50 billion will be mobilised he said, adding states will set up emergency centres too.

He predicted four million tests will come on stream next week, with five million in a month’s time, “though I doubt we’ll need that”, he said.

He also noted that people who do not want to take tests should not be tested.

More than 1,900 Americans are believed to have contracted coronavirus but concerns about the lack of testing has created speculation that the number could be much higher.

Focus has also turned to Mr Trump’s daughter and advisor, Ivanka, and also attorney general Bill Barr who attended an event earlier this month with the Australian home minister, who has tested positive.

A White House spokesman said that Ms Trump worked at home on Friday out of an abundance of caution, though there appeared to be no plans for her to self-quarantine. Similarly, the Department of Justice said Mr Barr was showing no symptoms, was working from home on Friday, and that there had been no recommendation by the Centre for Disease Control and Prevention for him to be tested.

The development came as coronavirus began to hit a range of services across the United States.

Individual states announced their own initiatives, with some announcing the closure of schools. Ohio, Virginia and Washington DC were some of the regions that ordered schools to shut, with states like New York mandating only a handful of schools to close.

In Washington, Smithsonian museums will shut from Saturday – the latest in a series of closures to hit America’s cultural industry. In New York, the lights on Broadway have gone dark, after an employee tested positive for the virus. The Metropolitan Museum of Art, the Guggenheim and the New York Philharmonic have all temporarily shut their doors.

Other major sites across the US have been closed, including Disneyland and Universal Studios in California and Disneyworld in Florida.

The sports world has also been hit. The Boston Marathon and the US Masters will now not take place. Major League Baseball has also postponed the start of its season. The world of basketball has also been hit after two players with the Utah Jazz team tested positive for the virus. The NBA has suspended activities for 30 days.