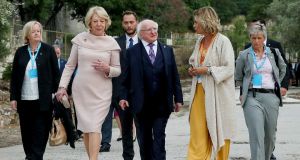 President Michael D Higgins and Sabina Higgins on the first day of their visit to Greece in the city of Athens at the Stoa of Attalos. Photograph: Maxwell’s

President Michael D Higgins has said society will be “judged by future generations as to whether we averted our gaze from the vulnerabilities of our planet . . . or had the empathy necessary to celebrate our interdependency”.

In a wide-ranging address in Athens, he said he is “conscious of the vulnerability of the Kurdish people”.

He called for a new “ecological-social paradigm” to reverse social and environmental damage and to reduce inequality, stating that such a model represents the “best response towards intergenerational justice”.

“A new paradigm of economy is now urgently required, one that might steer us back towards what will be a long but essential road of societal and ecological reparation,” Mr Higgins told an audience in the Greek capital on Thursday evening, where he delivered the keynote speech at the Athens Democracy Forum.

Such an approach would “address and reduce inequality while simultaneously operating within an ecological awareness of the planet’s natural systems and their constraints”, he said. It was “necessary for survival itself and our best prospect for an enduring form of cohesion in how we live together”.

The President said “democracy demands it, humanity needs it and the world requires it”.

Calling on intellectuals “to take a stand against the increasingly aggressive orthodoxies of the marketplace, of extreme individualism, that have permeated all aspects of life, including academia”, he praised academics such as Ian Gough, Kate Raworth, Mariana Mazzucato and Sylvia Walby, whose work embodied the “ideas of balancing outcomes” that were “at the heart of discourse here in the Stoa [of Attalos]”, a reference to the historic site of his speech that he said functioned as a “vital point of new dialogue and ideas, but also as a place of shelter” in ancient Athens.

Radical institutional reforms and “fostering deeper political economic literacy among our peoples” could “yield a deepening of deliberative democracy, address the growing alienation from the EU felt by so many of its citizens, offer an alternative to austerity populism and provide European institutions with greater legitimacy”, he said.

Mr Higgins was invited to give this year’s Aristotle Address, the centrepiece of the annual Athens Democracy Forum, by his Greek counterpart Prokopis Pavlopoulos. Other speakers at the event included European Council president Donald Tusk and Greek prime minister Kyriakos Mitsotakis.

The President’s speech came over 18 months since his State visit to Greece in February 2018.

On Friday, Mr Higgins will participate for the first time in the annual Arraiolos Meeting, an informal group of EU presidents, along with 12 of his counterparts. This year’s meeting will discuss joint efforts to consolidate European integration, specifically in regard to economic issues and the refugee crisis and to modern security challenges.

On Sunday, President Higgins will depart on a four-day State visit to Cyprus.