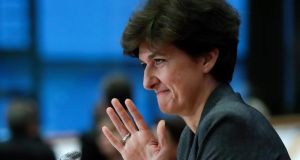 A third nominee to the next European Commission has been rejected by MEPs. In an embarrassing rebuke to president-designate Ursula von der Leyen, who will have to ask Paris for a new name, President Emmanuel Macron’s candidate, former MEP and minister Sylvie Goulard, was rejected overwhelmingly after two rounds of parliamentary interviews.

Ms Goulard, who had been nominated to a broad internal market portfolio, spanning industrial policy, defence and technology, was voted down 82 to 29 by members of the parliament’s internal market and industry committees.

Like the Romanian and Hungarian nominees who were rejected last week by the parliament’s Legal Affairs Committee, Ms Goulard faced ethics issues.

She is being investigated by the EU anti-fraud unit Olaf and the French authorities over allegations that for six months she used a European Parliament assistant for political work back in France, and over her work for a US think tank that paid her €10,000 a month.

The charge of misuse of parliament staff had previously been struck against the then Front National’s Marine Le Pen and had been sufficiently serious to lead to Ms Goulard’s resignation from the Macron government as minister for the army.

There are also complaints from MEPs at what they see as the unnecessarily unwieldy scope of her portfolio, although that is largely a matter for Ms Von der Leyen.

Ms Goulard protested that she had not yet been found guilty, let alone formally charged, and deserved a presumption of innocence. And many also see her scuppering as an act of revenge by members of the parliament’s centre-right EPP over Mr Macron’s refusal to back their leader and “spitzenkandidat”, Manfred Weber, for the president’s job.

The EPP, the largest group in parliament, the Greens and the left-wing Gue/NDL voted her down.

It is no coincidence that Ms Goulard happens to be a member of the group of former liberals of Renew – each of the parliament’s largest parties, which have sewn up the commissionerships between them, have now taken a hit. Romania’s Rovana Plumb was supported by the Socialists & Democrats, and Hungary’s László Trócsányi had the backing of the EPP.

It is a rebuke to party leaders over their willingness to overlook the parliament’s own choice and a reminder they cannot be ignored. At least in part Ms Goulard is a victim in a proxy war, the ongoing trial of strength between parliament and EU leaders.

Ms Von der Leyen will have to move quickly to find a replacement – the new commission is due to take office on November 1st, and a new candidate will have to go through the whole process of parliamentary approval before then.