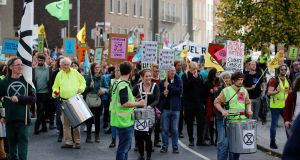 Dublin did not choke with up with traffic. There were no arrests at the main event, as a yacht painted in pink with the message “tell the truth” on climate disruption, was dragged through the streets by members of Extinction Rebellion Ireland (XRI).

There was even an orderly occupation of Merrion Square with a yurt, marquees, pink baths, and more than 20 smaller tents occupying one side of the park. The Portaloos were nearby - and no sign of an intervening garda wishing to impose the law.

Dublin City Council confirmed it would be keeping one gate open at night; unlike Hong Kong, those wearing masks were not detained.

The order was in contrast to disorder created at many events in more than 50 countries elsewhere, with London - again - proving to be the most disruptive among the initial actions of “rebellion week”. Dublin protestors set up temporary “swarming road blocks” at various locations later in the day causing more serious commuter traffic delays.

About 500 people gathered outside Dáil Éireann on Kildare Street. By the time the entourage including black coffin containing the symbolic remains of Mother Earth reached the square there was closer to 1,000 people in attendance.

Lorna Tierney of XR Kildare confirmed she would be camping out for the night and was not worried about the prospect of being arrested. “The gardaí have been very helpful. We have not been causing trouble for the average Joe.”

She stressed the movement was non political and without leaders, though socialist TD Paul Murphy was among their ranks carrying a blue XR flag. Meanwhile, Susan Breen – a local election candidate for People Before Profit in Co Wexford – spoke on their behalf on Morning Ireland.

The purpose of the week was to engage the public on the need to take more urgent action, she said, while the week would “ebb and flow” with different groups from all over Ireland making their presence felt on different days.

Copies of a letter containing XRI’s demands were delivered to the offices of Ministers Heather Humphreys, Michael Creed and Paschal Donohoe, conveniently located along the route. As the letter to Taoiseach Leo Varadkar was through the bars of a closed gate at Merrion Buildings, the crowed chanted “Listen Leo, listen”.

Their demands include a request to “tell the truth” about the climate emergency and act accordingly; ensure there is a just transition, and stop support for fracked LNG gas. XRI is also demanding net zero carbon emissions by 2025 - some 150 academics have signed a separate letter of support.

“Base camp co-ordinator” Julianne Flynn told a rally: “We are standing up to governments and corporations who are serving us up a death sentence.”

She said teachers, doctors, poets and movie writers were among their ranks. “We will be shutting down this area of Dublin and other areas too. We are left with no other choice.”

Schools striker Nika Holman (10) from Gorey, Co Wexford, said: “One government cannot change the world but it may inspire other governments worldwide to change.”

Referring to politicians, she added: “I want you to listen to the science because it seems as if you feel you have power over the laws of science and nature. If you think money is more important than the environment, try counting it without breathing.”

The group declined to indicate further actions to take place for the remainder of the week; only stating they will employ family-friendly, non-violent civil disobedience to “bring society to a standstill” and force the Government to respond to the climate emergency.