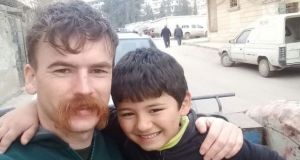 Morgan Mansfield pictured in the city of Afrin, Syria in 2017 with a local child.

In 2018, I interviewed Morgan Mansfield, a young man from Waterford who had gone to fight with the socialist-leaning Kurdish-led YPG against Isis forces in northern Syria in 2017.

He was using the Kurdish name “Tirpan Cudi” (Tirpan means “scythe” in Kurdish and Cudi is the mountain where Noah’s ark came to rest after the flood in some traditions).

When we spoke last year, he and his YPG group had just left the city of Afrin prior to its capture by Turkish forces.

Mansfield saw the YPG’s fight against Isis as a battle against fascism. He spent much of his time in Syria working as a YPG paramedic assisting the victims of bullet wounds and mines and suicide bombs.

Mansfield is home in Ireland now and agreed to talk to me again, this time using his real name. In the wake of Donald Trump’s withdrawal of US forces form the region, Mansfield’s friends and fellow YPG fighters in Northern Syrian towns are currently under bombardment from Turkish forces.

Is there a sense of betrayal among the Kurds that the Americans are leaving?

“I don’t think there’s a sense of betrayal because they have always anticipated this. It was just a case of if they can get a deal done before America withdraws, because America has been trying to withdraw for a bit. They knew that they couldn’t depend on anyone until there was an international deal that includes them.”

What do the YPG want?

“They don’t want an independent state, they just want autonomy in the various republics that Kurdistan covers.”

And now they’ve been abandoned by former allies?

“Yes... What’s happening now is Russia and America are both trying appease Turkey… Until last year the Russians were giving aid to the Kurdish until they gave the green light to Turkey. ”

And now the Americans have also given the green light to Turkey?

“Yes. This current invasion comes down to how much leash Russia want to give Turkey. Only one force can stop the aerial bombardment - the Russian air force or the Iranian air force. The [Assad] regime can do hard talk but the regime is a skeleton of what it was. They’re completely and utterly propped up by Russia and Iran so it’s up to Russia and Iran to put a stop to this.”

What does Turkey want?

“The north is very diverse - Kurds, Armenians, Arabs, Assyrian Christians. If you change that demography you create a new front against the [Assad] regime as well…

“Unless someone else wants to help the YPG, all these forces that have bailed out the [Assad] regime for years, like Iran and Russia, they’re going to have to contend with a new rebel in the north if Turkey succeeds. It’s going to put years and years on the conflict and I don’t see any winners.”

What’s the status of Isis now?

“They’re rioting in the Kurdish prisons. They’re attacking in the rear cities. They’re getting very confident and it’s very telling. [The YPG] are guarding some of the most dangerous people on earth and the Europeans and the Americans and the Russians are just letting them get attacked.”

What was the society like in the Kurdish areas?

“There was a sense of community spirit. There were community programmes. Women put huge effort into the social aspect of the revolution. They didn’t want to belong to be in the camp of the rebels or to be in the pro-regime camp either. They wanted something new, very pluralistic, very egalitarian, very pro-women.”

How did the Turkish forces operate when you were there?

“[The Turks] recycle a lot of Jihadis. They give them a new badge and call them The Free Syrian Army and using aerial bombardment they put a lot of pressure on the population to vacate... It’s the same kind of process now but this time America has given the green light.”

What do you think will happen?

“I’d be hopeful still. You’re dealing with a force [The YPG] who are very dedicated, who swear to the movement for life. They don’t marry. There’s a hugely supportive population.

“Last night I was watching [on the internet] people marching. There would be a wave of mortars from the Turkish side and then people would come out of the street marching in protest with loud music... They haven’t given in, in terms of morale, anyway.

“You’re invading an area where the local population is very aware. They have already fought battles. They’re very well prepared. You’re coming at a population that’s traditionally hostile to your policies. [The Turks] may have bitten off more than they can chew.”