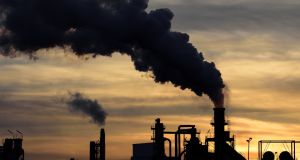 Turf and coal are used in the production of electricity, despite plans to eventually phase them out because of their high contribution of CO2 to greenhouse gas emissions. Photograph: iStock

The State has raised more than €3billion in carbon tax revenue since 2010 while at the same time spending money on subsidies for coal and turf, the Oireachtas Public Accounts Committee (PAC) has heard.

The committee was also told the National Oil Reserve Agency has accumulated a surplus of more than €200 million due to a two cent levy on every litre of fossil fuel, which it is prohibited from spending.

The agency was set up to establish a 90 day reserve of essential fuel but having covered a debt of €450 million it is now collecting more than its operating costs every year, the committee heard.

Asking members to approve a special meeting of the PAC to discuss the carbon tax issue, committee chairman Sean Fleming said it was “shameful to think we have collected this money in the name of carbon” while at the same time the Exchequer was providing subsidies for the use of turf and coal.

Both of those fuels are used in the production of electricity, despite plans to eventually phase them out because of their high contribution of CO2 to greenhouse gas emissions.

Mr Fleming, a Fianna Fáil TD, referred to a “very interesting report” from the Central Statistics Office which he said seemed to show that the State had incurred significant costs in terms of environmental damage and foregone taxes through subsidising turf and coal, while at the same time subsiding the burning of them. He said the money raised in carbon taxes should have been used to provide and alternatives to coal and turf, such as subsidising cleaner electricity.

He said it was “the job of the PAC to call in the department and schedule a special meeting.”

Fianna Fáil TD Marc MacSharry said the issue of the carbon levy funds was similar to the situation with the fuel oil levy, which was raised to cover the operating costs of the the National Oil Reserve Agency. He said under legislation dating from 2007 the relevant minister was empowered to raise a levy to cover the agency’s operating costs. But quoting from the 2007 National Oil Reserves Agency Act, he said, crucially, it was intended that the sums raised “do not exceed the estimated expenses of the agency and of each designated subsidiary”.

Yet, he said, the levy had eliminated €450 million of debt and had gone on to raise a further €200 million. He said the 2018 accounts for the agency noted the “the annual level of income . . . has resulted in a surplus of income for the agency each year”.

The accounts noted Government plans to “repurpose” the levy for a new climate action fund, he said. But while the Government could do that in the future there would be a problem in making new legislation retrospective, to enable the Government to access the agency’s surplus, Mr McSharry said.

The PAC should ask the agency and relevant government departments to come in and discuss the issue, he said.