Could Arshak Makichyan be Russia’s answer to Greta Thunberg?

Makichyan: ‘They look at their own lives, their failure to get on . . . and feel resentful’ 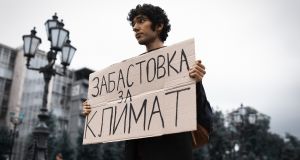 Unlike Greta Thunberg, eco activist Arshak Makichyan does not have a wealthy family to support him. Photograph: Facebook

As Extinction Rebellion protests took off in scores of world cities this week a Russian television newscaster delivered a damning verdict on the Swedish teenage climate change activist Greta Thunberg and her millions of followers. A pathological “hysteria” was gripping western capitals, he said. “And for once it’s not about Russia. ”

However, Arshak Makichyan, a violinist who has been inspired by Thunberg to launch a Russian campaign to avert global warming, dismissed the state media commentary as “political”.

“Everyone knows that the epoch of hydrocarbons extraction is coming to an end,” he said. “The authorities just don’t want protests here.”

Scientists warn that environmental catastrophe lies ahead as warmer weather melts the permafrost that covers half of the country and parches agricultural lands further south.

Addressing climate change is particularly difficult for countries like Russia that depend on oil and coal exports for vast export earnings. But there are signs that the Kremlin is beginning to take the problem seriously. Russian president Vladimir Putin ordered his government last month to ratify the Paris Agreement of 2015 that commits participating countries to reducing carbon emissions.

However, the Russian president has dismissed Thunberg’s demand for a radical shift in world climate policies as unrealistic. “She’s a kind, but poorly informed teenager,” he told an energy conference in Moscow last week.

While Thunberg and her “Fridays for Future” protests have been making headlines across the world over the past year, Kremlin-controlled media has scarcely mentioned the celebrity climate warrior, let alone discussed what drives her furious agenda.

Arshak Makichyan learned about climate change for the first time when he came across a tweet by Thunberg on the internet last year that blew his mind. Aged 25 years and a graduate of the prestigious Moscow Conservatory, he has abandoned all thoughts of a musical career and dedicated his life to climate activism. “The planet is dying,” he says. “We need to talk about it.”

Unlike Thunberg, Makichyan does not have a wealthy family to support him and has to reach into his own pocket to fund the production of campaign leaflets and T-shirts that he hand paints with the “We are Greta Thunberg” logo.

Neither does he have the benefit of living in a country like Sweden that welcomes civic activism and accommodates dissident voices in the fabric of political debate.

Moscow authorities have repeatedly refused to grant Makichyan permission to organise climate change demonstrations in the city. Instead he stages solo pickets – the only form of unauthorised protest allowed under Russian law – every Friday in central Moscow’s Pushkin Square.

Police have for the most part left him alone, but the public response is sometimes unfriendly. At a picket last week where Makichyan was holding up a banner proclaiming “Strike for the Climate” a man approached and accused him of trying to start a Ukraine-style “Maidan” popular revolution. Others appeared ignorant of the looming climate crisis and plied him with questions.

The Friday protests are still small, but Makichyan says the campaign message is spreading rapidly on the internet. More than 700 people have joined recent Fridays for Future pickets in Russian cities from Kaliningrad on the Baltic to the port of Vladivostok on the Pacific. “It’s just the start. Don’t forget that nobody knew about Greta half a year ago and now everyone is talking about her.”

Most budding Russian climate activists are young, in the 16-35 age range. Winning over the hearts and minds of the older generation is a tougher battle.

Although not short of admirers, Thunberg has also stirred public hostility across the world, nowhere more so than in Russia, where Greta bashers reacted furiously to her passionate speech to the United Nations last month, flooding social networks with vitriolic comment.

Thunberg agitates Russians because she represents the power of the individual to stand up to the authorities that doesn’t exist in their own country, says Makichyan. “They look at their own lives, their failure to get on and their inability to bring about change and they feel resentful.”