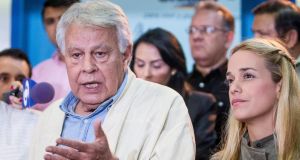 Spain’s former prime minister Felipe González, above, has long faced questions about the extent of his knowledge of the Anti-Terrorist Freedom Groups (GAL), which operated in the mid-1980s. File photograph: Miguel Gutierrez/EPA

Former Spanish prime minister Felipe González is under scrutiny following the publication of CIA documents which appear to link him to death squads that hunted down Basque separatists during his tenure.

Mr González, a Socialist who governed from 1982 until 1996, has long faced questions about the extent of his knowledge of the Anti-Terrorist Freedom Groups (GAL), which operated in the mid-1980s. The GAL are believed to have killed 27 people during their campaign against the Basque terrorist group Eta, almost all of them in France. Several of the victims were completely unconnected to Eta.

Last week, the right-wing La Razón newspaper published parts of a declassified CIA document which suggested that the politician knew of, or even encouraged, the creation of such groups.

“The government, however, appears determined to adopt an unorthodox strategy in dealing with ETA,” reads the redacted report, titled Terrorism Review and dated January 1984.

It continues: “[…]González has agreed to the formation of a group of mercenaries, controlled by the Army, to combat the terrorists outside the law.”

The document also states that “the mercenaries would not necessarily be Spaniards and that their mission would be to assassinate Eta leaders in Spain and France.” It goes on to name the GAL as such an organisation.

Eta killed more than 800 people during a four-decade campaign for Basque independence. It last killed in 2010 and in 2018 it disbanded.

Although this is not the first time the document has been made public – it first surfaced in 2011 – its circulation now has triggered renewed calls for an investigation into the GAL and Mr González’s possible involvement in them.

“The story of the GAL is repugnant to me and if my party has had anything to do with it, whoever is responsible must pay for it,” said Eneko Andueza, secretary general of the Basque Socialist Party in the province of Gipuzkoa.

“If we can clarify things all this time later, then that’s a good thing, above all because we owe it to the victims.”

After the GAL’s activities came to light, the judiciary investigated, generating a scandal which contributed to the eventual destabilisation of the González government. In 1998, his former interior minister, José Barrionuevo, and former secretary of state for security, Rafael Vera, were the most high-profile figures to be jailed for their involvement. After several months in prison they were granted early release.

However, there have long been questions regarding who was the mastermind behind the death squads, commonly referred to as “Mr X”.

“There has always been the question as to who is X, or Mr X, who was there at the start of this utterly illegal organisation,” said Íñigo Urkullu, the nationalist president of the Basque region, when asked about the case on Friday.

“It is absolutely necessary that this is clarified and, given that we are talking about state terrorism, that congress […]should be able to form an investigatory commission.”

The Basque Nationalist Party (PNV), which Mr Urkullu used to lead, was one of several Basque, Catalan and Galician nationalist parties to register a request for a parliamentary probe into the extent of Mr González’s involvement, in light of the CIA document’s publication.

However, Mr Urkullu said he does not expect a parliamentary commission to be created. Despite the calls for an investigation by the Socialist Party’s Basque wing, the Spanish Socialist Party leadership in Madrid has closed ranks with its former leader.

“It’s not up to us to go back over things which have already been through the courts and sentenced,” said Adriana Lastra, spokeswoman for the Socialist Party in Congress.

Mr González would not comment on the issue when efforts were made by The Irish Times to contact him. A spokesman for the former prime minister told the newspaper that “this case was tried by the supreme court and [Felipe González] was a witness in that case but never a defendant.”