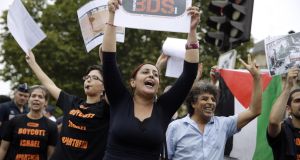 A protester holds a placard supporting BDS (the Boycott, Divestment and Sanctions movement) in Paris in 2015. Photograph: Kenzo Tribouillard/AFP via Getty Images

Seven judges at the European Court of Human Rights in Strasbourg, presided over by Irishwoman Síofra O’Leary, have overturned a conviction by France’s highest court, the Court of Cassation, which criminalised peaceful protests by the Boycott, Divestment and Sanctions movement.

The landmark decision, which was handed down on June 11th, found that the freedom of expression of 11 BDS supporters was violated by the October 2015 ruling in Paris.

Article 10 of the European Convention on Human Rights guarantees the right to freedom of expression.

In September 2009 and May 2010, the 11 applicants took part in protests in the car park of a Carrefour supermarket in Alsace.

The protesters wore “Palestine Shall Live” T-shirts, displayed avocados and baby wipes imported from Israel in trolleys, and distributed pamphlets which linked Israeli products to Israeli government policy and “the crimes in Gaza”.

The protesters asked shoppers to boycott Israeli goods, particularly those from the Occupied Territories, and to sign a petition to Carrefour management.

Four pro-Israeli groups, the International League against Racism and Anti-Semitism, Lawyers Without Borders, Alliance France-Israel and the National Bureau for Vigilance Against Anti-Semitism, filed a lawsuit against the protesters for incitement to discrimination. They were initially cleared by a court in Mulhouse, then convicted in Colmar.

The case went all the way to the Court of Cassation, which confirmed the conviction in October 2015 on the grounds that freedom of expression may be restricted in a democratic society to prevent disorder and protect the rights of others.

The applicants appealed to the ECHR five months later. The Convention on Human Rights “leaves little room for restrictions on freedom of expression in the field of political discourse or questions of general interest”, the seven judges wrote. “Political discourse is often virulent by nature and a source of disagreement. It is nonetheless in the public interest, unless it degenerates into incitement to violence, hatred or intolerance.”

The judges were unanimous in finding that France violated Article 10.

In her partially dissenting and partially concurring opinion, Judge O’Leary went further in finding that France also violated Article 7 of the Convention, which bans arbitrary prosecution, conviction and punishment.

“Offences and the relevant penalties must be clearly defined by law,” Judge O’Leary wrote of the French decision. The applicants were convicted under an 1881 law on freedom of the press which does not mention economic discrimination.

The other six judges cited as precedent Willem v. France, a 2004 case in which a French mayor directed municipal catering services not to buy Israeli products.

Judge O’Leary argued that Willem’s status as mayor and the fact that he had authority over the caterers made his position substantially different from that of the supermarket protesters, who had no power over how customers spent their money.

The protesters could not have known that their demonstrations in the Carrefour parking lot would lead to criminal charges and convictions, Judge O’Leary wrote.

Furthermore, “the position in French law was far from clear”, since other courts in France acquitted people in similar cases. There was “no evidence of a perceptible line of case-law”. The failure of the Court of Cassation to provide any rationale for its dismissal of a violation of Article 7 was “at the very least unhelpful”, Judge O’Leary wrote.

The question of when and how one is allowed to criticise Israel was central to the ECHR decision. Judge O’Leary took the French court to task for failing to distinguish between free political debate and “quite different, sinister and disguised calls to hatred, intolerance and anti-Semitism, none of which are tolerated under the Convention”.

French courts had condemned the 11 applicants to pay a total of €13,000 in fines and damages to the pro-Israeli groups.

In overturning their convictions, the ECHR ordered France to pay the 11 a total of €101,180 in costs and damages.

ECHR decisions trump verdicts in national courts. Unless France appeals the ECHR ruling within three months and wins, the European decision means there can be no more prosecutions of BDS protesters in France, says Antoine Comte, the lawyer for six of the 11 applicants, who has spent much of the past decade defending BDS supporters in courtrooms across France.

“It is extremely important that we be able to debate these questions democratically,” Comte said. No one was prosecuted over past boycotts against apartheid-era South Africa, Russia’s war in Chechnya or the Argentine military dictatorship, he notes.

“This is a huge disavowal of the Court of Cassation,” Comte continues. “French leaders fear difficulties with those who claim to represent the Jewish community in France. It’s a big mistake in French foreign policy, and it’s not helping our Israeli friends.”

The Association France Palestine Solidarité said the ECHR decision “recognised that the call to boycott is a civil right, as long as that call is motivated by criticism of a state and its policy”.

Bertrand Heilbronn, the president of AFPS, is a scientist and engineer who became involved in Palestinian issues when he led an electrification project in the Khan Younis refugee camp in Gaza.

When the Court of Cassation upheld the conviction of the BDS protesters, it created a widespread misperception that the BDS campaign was illegal in France, Heilbronn says. “It’s important to us that this changes people’s mindset.”

Heilbronn praised Ireland’s Occupied Territories Bill, which was passed in the Dáil and Seanad, but whose progression to law was blocked by the last government. “It’s a duty to boycott products from the settlements,” Heilbronn said. “We want to say ‘Bravo Ireland, you’re the avant-garde.’”

Judge O’Leary concluded her written opinion with a historical reminder. “Named after Captain Charles Cunningham Boycott, the first boycott was initiated by the tenants and residents of Lough Mask and the village of Ballinrobe in Co. Mayo in 1880,” she wrote.