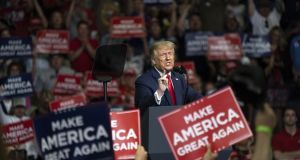 Donald Trump declared “the silent majority is stronger than ever before” at his comeback rally on Saturday, but thousands of empty seats appeared to tell a different story.

The US president’s much hyped return to the campaign trail turned to humiliation when he failed to fill a 19,000-capacity arena in the Republican stronghold of Oklahoma, raising fresh doubts about his chances of winning re-election.

“The Emperor has no crowd,” tweeted Dan Pfeiffer, a former senior adviser to Barack Obama.

The overwhelmingly white gathering at Trump’s first rally since March was dwarfed by the huge multiracial crowds that have marched for Black Lives Matter across the country in recent weeks, reinforcing criticism that the president is badly out of step with the national mood.

The flop in Tulsa was an unexpected anticlimax for an event that seemed to offer a combustible mix of Trump, protests over racial injustice and a coronavirus pandemic that has killed nearly 120,000 Americans and put more than 40m out of work.

First, Trump’s planned speech to an overflow event outside the venue was cancelled due to lack of attendance. Cable news networks showed a “Trump” lectern standing idle as workers dismantled a stage.

Then the rally venue itself was estimated to be only two-thirds full, with numerous empty seats in the upper tier and empty space on the area floor, despite his campaign having claimed that it received more than a million ticket requests. One explanation for the disconnect spread rapidly online as Twitter users suggested many of the requests were fakes filed by bored teens and even fans of Korean pop music playing a prank on the US president.

The upper section of the arena is seen partially empty as Trump speaks during a campaign rally at the BOK Center in Tulsa. But to Trump officials Oklahoma had surely seemed a safe bet for the so-called “transition to greatness” event; Trump had defeated Hillary Clinton 65 per cent to 29 per cent in 2016. Yet the plan began to unravel when the rally, originally scheduled for Friday, was moved back a day following criticism that it would have clashed with Juneteenth, and in a city where in 1921 white supremacists killed an estimated 300 black residents.

The Trump campaign was also condemned for ignoring warnings from public health experts about the dangers of holding the biggest indoor gathering yet seen during the pandemic. Oklahoma has seen a 91 per cent jump in its coronavirus cases over the past week. Six staff members who helped set up the event tested positive and there were fewer face masks among supporters than “Make America great again” signs.

The president appeared to trivialise the virus, “Testing is a double-edged sword,” he told the rally. “We’ve tested now 25 million people. It’s probably 20 million people more than anybody else. Germany’s done a lot. South Korea’s done a lot. Here’s the bad part, When you do testing to that extent, you’re going to find more people. You’re going to find more cases. So I said to my people, ‘Slow the testing down, please!’”

He also mused that Covid-19 has many different names, including the racist term “Kung flu”. The crowd cheered.

It was a characteristic moment in a rambling speech that lasted nearly two hours but never caught fire. Trump offered few surprises, planting himself firmly on the side of law and order, lambasting the media and stoking division, hatred and fear.

“The silent majority is stronger than ever before,” he insisted, echoing the former president Richard Nixon. “Five months from now we’re going to defeat Sleepy Joe Biden. We are the party of Abraham Lincoln and we are the party of law and order.”

Warning against defunding police, he said: “It’s one in the morning, and a very tough? - I used the word on occasion - hombre is breaking into the window of a young woman whose husband is away as a traveling salesman or whatever he may do. And you call 911 and they say, ‘I’m sorry this number is no longer working.’”

Trump, who has faced withering attacks for his response to the protests, which included threatening to deploy the US military, claimed: “I’ve done more for the black community in four years than Joe Biden has done in 47 years.”

But he offered no compassion for George Floyd or thousands of protesters who have taken to the streets against police brutality. Instead he railed against the recent removals of Confederate statues.

“The unhinged leftwing mob is trying to vandalize our history, desecrating our monuments, our beautiful monuments, tear down our statues and punish, cancel and persecute anyone who does not conform to their demands for absolute and total control, we’re not conforming,” he said.

Election opponent Biden was dismissed as “a helpless puppet of the radical left”, “puppet for China” and “very willing Trojan horse for socialism”.

Trump also took some long digressions. Clearly stung by media coverage of his slow, faltering walk down a ramp at the graduation ceremony for the US military academy at West Point last week, he riffed about it being steep and his slippery leather-soled shoes putting him at risk of falling in front of the cameras.

The low turnout will be a blow to Trump, whose campaign reportedly saw it as a way to revive his flagging spirits amid slumping poll numbers. The president had said last Monday: “ We’ve never had an empty seat. And we certainly won’t in Oklahoma.”

But confronted by empty seats that may prove more telling than any opinion poll, Trump hailed his supporters as “warriors” and blamed protesters for the poor turnout: “We had some very bad people outside. They were doing bad things.” He also described them as a “bunch of maniacs”.

The Trump campaign separately claimed that protesters interfered with the president’s supporters, even blocking access to the metal detectors, which prevented people from entering the rally. But multiple reporters on the ground saw no evidence of this.

Rallies are Trump’s lifeblood. As usual, this one ended with the Rolling Stones’ “You Can’t Always Get What You Want.” –Guardian News and Media