CDU looks ahead after Merkel’s ‘pussyfooting around’ 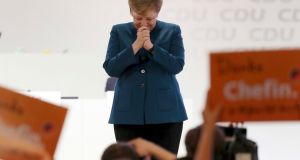 German chancellor and chairwoman of the Christian Democratic Union (CDU) Angela Merkel is applauded after her farewell speech. Photograph: Christian Charisius/DPA via AP

Like millions of Germans on Friday, Helmut Gels was glued to the suspense-filled handover of power in Hamburg.

Gels is the CDU mayor of Vechta, a rural town in Lower Saxony where his party scored its strongest federal election result in the country: a whopping 53 per cent, exactly double the disastrous national figure.

But that result was down 10 points on 2013, and even Gels, professing his “huge respect” for Angela Merkel, concedes that her time had passed.

Merkel’s political legacy remains, he says: unflappable in the euro crises, nonplussed by alpha-male populists and behind a “courageous decision in 2015 to let in people fleeing for their lives”.

Then comes the but.

“There has been too much pussyfooting around,” said Gels, “and that annoys and unsettles people.”

Ask him – or any other German mayor – where things are stuck, and you should brace yourself for a long list.

Three years of emergency summit shadow-boxing over diesel and the future of mobility – and this in the country that invented the internal combustion engine.

Doubts over whether Germany can manage the so-called “energy transition” to renewables in 2022, when the last nuclear plant goes from the grid.

And, like Ireland, Germany is tied up in procedural knots over broadband rollout, with many fearing Europe’s leading industry nation will miss the digital revolution.

The 15-year Merkel era so far has been a time of prosperity and stability in Germany compared with elsewhere in Europe, with a postwar record jobless low and a series of balanced budgets. But critics suggest Merkel pushed no major social, economic or tax reforms of her own, and allowed a drastic slide in Germany’s climate change ambition.

Instead of deciding the big future projects, Gels – echoing many around Germany – suggests Merkel-era Germany embraced a sit-it-out approach on crucial decisions.

“If I make a decision I know at least one person will be against me,” he says, “but if I make no decision I have everyone against me, and then the populists move in and promise everything.”

Merkel critics are quick to blame their departed leader for a soporific mood both in the CDU and Berlin’s corridors of power.

But as party leader, Merkel was re-elected biannually with levels of support that never dipped below 88 per cent. In almost two decades, she transformed the CDU from an ageing party of the right beyond urban areas to a centrist party more palatable with younger city dwellers.

Her CDU modernised – slaughtering holy cows such as nuclear power, military service and euro bailouts – but always with a resounding party conference mandate.

Even her controversial August 2015 decision not to close German borders to asylum seekers, allowing the rise of the far-right AfD, was backed by CDU delegates four months later.

The euro crisis made her Europe’s indispensable leader, insisting that “if the euro fails, Europe fails”. But she earned the name “Madame Non” for being quick to dismiss – or water down beyond recognition – others’ ideas without any better proposals. This week’s compromise on French euro reform proposals was the latest example of that habit.

Leading CDU figures in Hamburg conceded Germany, under Merkel, has been sleepwalking into the post-Brexit EU and demanded a “new style” of leadership.

“I understand that this chancellorship was influenced by crises,” said Armin Laschet, powerful CDU state premier of North Rhine-Westphalia. “But it would be nice if we entered a new era in which Germany sets its own impulses.”

As delegate Norbert Bockstett put it: “The arbitrariness in Germany politics has to end.”