Violence drives more than 100,000 women to strike in Israel 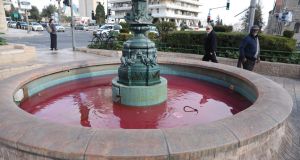 The fountain in France (Paris) Square in Jerusalem is turned red by activists as part of a violence against women national protest in Israel. Photograph: Abir Sultan/EPA

More than 100,000 women across Israel plan to strike on Tuesday to protest against violence against women, and many companies have encouraged their female workers to join the protest.

Tuesday’s protest, under the banner of “I’m a woman, I’m striking”, were triggered by two unrelated murders last week of particularly young victims: Sylvana Tsegai (13), an asylum seeker from Eritrea living in Tel Aviv, and Yara Ayoub (16) from the Arab village of Jish. Theirs were the 23rd and 24th murders of women and girls in Israel this year, which represents a sharp escalation in such incidents compared to last year.

The activists are also protesting against the government’s refusal to establish a parliamentary inquiry committee to investigate violence against women, and want the government to transfer funds it had promised to tackle the problem.

Lawyer Keren Greenblatt, one the protest organisers, said the strike was a response to an emergency.

Meeting with representatives of women’s groups on Monday, Israeli president Reuven Rivlin stressed that the subject was a matter for Israeli society as a whole and not just women. “We must act immediately and do everything we can to save the life of the next woman,” he said.

According to women’s groups, some 200,000 women a year are exposed to gender-based violence, but there are only 14 shelters for battered women across the country, with each shelter housing only about 30 families.

On Sunday, women rallied outside prime minister Binyamin Netanyahu’s office in Jerusalem, holding up banners which read: “Prime Minister Netanyahu, wake up! The blood of women is not cheap, don’t allow us to die. Violence starts in the corridors of power.”

Some 232 institutions have expressed support for the strike, including 42 local municipalities, 76 civil society organisations and 30 corporations. Some have announced that employees participating in the strike will not be docked pay.

Microsoft Israel announced that its employees would wear black “in solidarity with all women suffering from violence, in Israel and around the world”.

The planned strike has generated a media tailwind, similar to the one-day strike organised by the LGBT community in July to protest against the fact that a surrogacy law passed by the Knesset excluded same-sex couples.

Demonstrations are planned in all Israel’s large cities, with the main event scheduled to take place in Tel Aviv’s Rabin square on Tuesday night.