America Letter: Democrats are still no closer to deciding who should take on Trump 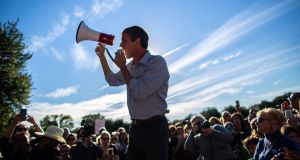 Beto O’Rourke, who lost against incumbent Ted Cruz in Texas in November, has indicated he would not rule out a presidential bid. Photograph: Tamir Kalifa/New York Times

The funeral of the late George HW Bush brought a rare moment of introspection to Washington as presidents past and present gathered in Washington National Cathedral to honour the 41st president.

Though this week’s events were not about US president Donald Trump, the contrast between the former Republican president and the current occupant of the White House was implicit, as each eulogist referenced Bush’s integrity, character and sense of leadership.

The rare sight of all five surviving US presidents together – three of them Democrats – also raised the question as to who might be the candidate to take on Trump in 2020.

As politics settles down after the midterm elections and with the first primaries less than 14 months away, Democrats are still no closer to deciding who will represent them in one of the most consequential elections in decades.

As 2018 draws to an end, there are signs that some decisions are imminent, however.

This week former New York mayor Michael Bloomberg visited Iowa. Though ostensibly the billionaire businessman was there to promote his new documentary on climate change, the visit to the state that will be the first to hold its caucus is a sure sign that he is considering a run. The 76 year old who ran for New York mayor as a Republican but subsequently registered as a Democrat reportedly donated $250,000 to the Iowa Democratic Party during the recent election cycle.

California senator Kamala Harris, who has long been rumoured to be considering a bid, said this week that she would make a decision over the holidays with her family.

Other possible candidates confirmed they would not be seeking the nomination. Former Massachusetts governor Deval Patrick, a well-respected figure across the Democratic Party, said he would not be running, citing the impact of the election process on his family.

With his photogenic appeal and Obama-like rhetorical qualities, Beto O’Rourke could be the one to watch

Much to the relief of many in the Democratic establishment who feared a celebrity candidate who might out-trump Trump, he announced on Twitter that he would not be running in 2020 despite visiting Iowa earlier this year. It was not clear if the decision was related to an arrest on domestic assault charges last year which he has dismissed as bogus.

But perhaps the biggest splash this week came from former vice-president Joe Biden. During a book tour stop at the University of Montana on Monday, 76-year-old Biden said he would be the “most qualified candidate” to run in 2020. He also conceded some of his limitations. “I am a gaffe machine, but my God, what a wonderful thing compared to a guy who can’t tell the truth,” he said in reference to Trump. He also acknowledged that his age could be an issue and said he would make a decision within the next six weeks to two months.

Asked about his comments, prospective candidate Elizabeth Warren gave a diplomatic answer: “I think that the vice-president has many wonderful qualities and I’m glad to hear that he’s out and talking about it,” she said through a gritted smile.

The Massachusetts senator is widely expected to run, despite reports at unease among some of her aides about her decision to take a DNA test to prove her Native American heritage following Trump’s description of her as “Pocahontas”.

The other major prospective candidate who has kept a relatively low profile since the midterms is Beto O’Rourke. The Senate hopeful, who lost against incumbent Ted Cruz in Texas in November, indicated last week that he would not rule out a presidential bid, despite saying the opposite during the Senate campaign.

Since then he has been working out his final few weeks as a congressman in Washington, where he has been representing the 16th district of Texas for six years. Significantly, he reportedly met with Barack Obama at the former president’s office in the weeks following the midterm elections.

With such a crowded field, Democratic strategists in Washington are reluctant to put their money on any one candidate. But with his photogenic appeal and Obama-like rhetorical qualities, O’Rourke (46) could be the one to watch, particularly given the huge amount of money he attracted from across the country during the Senate campaign.

With O’Rourke facing an empty calendar after he leaves Washington this month, it may be now or never for the congressman from Texas.