Catholic church in Germany under pressure on abuse reports 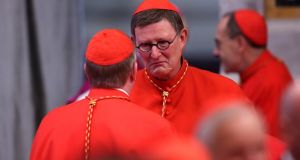 Cologne and Aachen are two of Germany’s most influential Catholic dioceses, but diverging approaches of their respective bishops to clerical sexual abuse has seen survivors praise one and demand the other’s resignation.

In the latter case, Cardinal Rainer Maria Woelki is archbishop of Cologne and one of Germany’s most senior clerics and heads the world’s wealthiest Catholic diocese.

For eight months, though, the 64-year-old has been sitting on a time bomb with a tick familiar to Irish ears: a 350-page report into decades of clerical sexual abuse and its systematic institutional cover-up.

Explosive claims in the report have leaked, including a damning assessment of today’s archbishop of Hamburg, Stefan Hesse. During his 11 years as a senior figure in Cologne until 2017, he is accused of showing a “lack of awareness of the problem – towards cases of sexual abuse of minors by clerics”.

Archbishop Hesse threatened to sue if the unflattering report was published, claiming it is damaging to his reputation. And so the report – complete with claims of abusing priests moved by bishops – has vanished into a drawer with a new report in the works.

Compare and contrast with the neighbouring diocese of Aachen, which commissioned the same Munich law office to scour its archives.

Presenting the 459-page report last week, based on a dozen sample cases, Bishop Helmut Dieser of Aachen pulled no punches. He criticised three bishop predecessors and other senior church officials for cultivating what the report called a culture of “perpetrator protection”.

Diocese spokesman Jürgen Jansen says the report was “not about pillorying anyone, or disputing their achievements, but highlighting their failings in the area of sexualised violence”.

Similar to the Cologne report, investigators found that Aachen bishops moved abusing priests abroad, or into other dioceses, without intervening or informing anyone of the priest’s past.

In one case, a chaplain who was found guilty of abusing 14 boys in the 1950s begged his bishop to be removed from youth work – a plea the bishop ignored, prompting the priest to abuse again.

The Aachen report’s authors said abuse victims “barely figured” in the minds of local bishops and, when they did, “then not because of the pain caused to them, but because they were seen as a threat to the dioceses and the institutional church”.

Report co-author Ulrich Wastl said at its launch he hoped his report would prompt “critical reflection” among readers. The diocese has set up a hotline and at least a dozen new survivors have come forward.

Among those pushing back is Bishop Heinrich Mussinghoff, one of those criticised in the report. He dismissed the report as a “confrontational document” that ignored changing societal attitudes to abuse, and developments in church law.

After suppressing their own report, a similar pushback is under way in Cologne. A new, expert opinion on the unpublished report accused its authors of presenting an “indictment against diocesan officials . . . full of highly subjective, morally tainted accusations”.

The differing approaches in Cologne and Aachen are symptomatic of a seething standoff among German bishops, between those that favour full disclosure and those who are more wary of opening archives and criticising their predecessors.

“Work on the reports began in parallel, the methodology was identical, so Cologne’s refusal to publish – citing personal privacy laws – in reality reflects a lack of nerve,” said the official. “In the bishops’ conference we agreed to name names. Aachen has honoured that promise and, so far, there has been no legal pushback by those named.”

Pressure continues to build on Cardinal Woelki and his allies in Cologne after the resignation of two survivors from a diocesan committee on clerical sexual abuse. Karl Haucke, who was abused in a Redemptorist boarding school, says church officials tricked him into backing their suppression of the original report.

“For years I swore I’d never allow someone exert so much power over me that they could humiliate me,” said Mr Haucke,” And now they have done it again. . . I’m curious how Cardinal Woelki can now square his office with his behaviour.”