Quedlinburg’s restoration has brought tourists and business, but many challenges remain 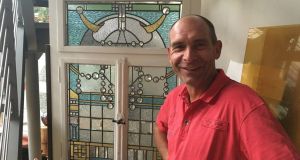 When the Vatican needs to restore historic stained-glass windows, it dials Q for Quedlinburg.

Three hours southwest of Berlin, the eastern German town is a medieval miracle of half-timbered houses and crooked, cobbled streets.

Spared the socialist wrecking ball in East German times, since unification the town has undergone a quarter-century of careful, expensive restoration work to become the embodiment of the “blossoming landscapes” promised by the late Helmut Kohl in 1990.

Frank Schneemelcher wanders through his glass workshop in the town, the air ripe with the smell of fresh putty. He epitomises the can-do, entrepreneurial attitude in eastern Germany that survived four decades of socialism.

“Helmut Kohl was right, we did get our blossoming landscapes,” said Schneemelcher. “Can you imagine what it’s like for someone like me to get a call from the Vatican for a project?”

His family glasswork firm is more than a century old and now in its fourth generation - a miracle in Germany, given two World Wars and nationalisation.

Shut away behind the Iron Curtain, in an obscure corner of East Germany, the firm never had a chance to modernise. In hindsight, that was a blessing: unlike competitors, Schneemelcher’s firm still has the equipment and skills required to restore historic stained-glass windows and create work with contemporary artists in the medium of stained glass.

And since Quedlinburg was declared a Unesco world heritage site, Schneemelcher and his team of 20 have played a huge role in restoring the town castle, churches and other historic buildings to their former glory.

With the restorations came the visitors, a godsend for a region hit hard by the industrial collapse of the 1990s. Recently named Germany’s prettiest town, Quedlinburg’s visitor numbers are growing 6 per cent year-on-year, and every second euro earned in the town today is linked, directly or indirectly, to tourism.

For mayor Frank Ruch, the massive injection of €120 million in federal funds for restoration has paid off. “We’re all very proud, but we only got these blossoming landscapes because were able to afford the fertiliser,” he said.

But challenges lie round the corner. Like other towns in the region, one-quarter of Quedlinburg’s annual budget comes from Germany’s unification fund, Aufbau Ost, which will end in its current form in 2019. From then on, western German regions neglected in the last few years will be clamouring for a slice of the investment pie. In Quedlinburg and across Germany’s east, a final race is on to invest in roads, rail and high-speed internet.

“We have to start planning now for a different financial future,” said Ruch, who also conceded that Quedlinburg is only one side of life in eastern Germany. Last week, an annual report from Berlin warned that eastern economic performance per head of population is stuck at 73 per cent of western German levels. Eastern Germans earn, on average, €4,000 less than their western cousins annually, with almost half the level of savings.

The shortage of big employers in the region is a risk for the future. The quickest way to darken the conversation in Quedlinburg is to ask someone where their children are living - usually far in the west.

Since 1990, eastern Germany’s population has fallen by 15 per cent to 12.6 million. And although Quedlinburg’s population rose last year to 25,000, the first rise in years, the surrounding state of Saxony-Anhalt has seen its population drop by more than one-fifth since unification.

Today, eastern Germany is half as full as the west, and the provision of essential services like doctors and public transport will get more complicated by 2030, when the population is forecast to have dropped by another 7 per cent – with one in two retirees.

Despite the shrinking population, eastern Germany still has a higher jobless rate (8.5 per cent) than the national average (5.6 per cent). “The jobless rate is dropping because more older workers are retiring than young people are starting work,” warned the Mitteldeutsche Zeitung daily recently. Many new jobs are being created in the low-cost service sector, from pizza delivery to old-age care.

The day the paper’s report appeared, under the headline “Boom? What Boom!”, chancellor Angela Merkel visited Quedlinburg on a federal election campaign stop. Polite applause from supporters was drowned out by hundreds of angry protesters from the far-right Alternative für Deutschland (AfD), furious at her refugee policy that saw 890,000 people granted asylum in Germany in 2015 alone.

“Go to your Moslems,” read one sign from a protester from the AfD, which finished second in last year’s state election here, on 24 per cent.

Watching the confrontation from the sidelines was Klaus Hofmeister, born in Quedlinburg just before the Nazis came to power in 1933. “We’ve had everyone in Quedlinburg, even Adolf,” he said. “You shouldn’t overestimate the protest here today, nor play it down. I think more people here will vote for the AfD than are letting on.”

Back in his glass workshop, Frank Schneemelcher takes stock of the post-unification years as he switches out the lights for another day.

“I can still remember our workshop’s sagging floors, today I have underfloor heating,” he said. “Things are a dream compared to before. I’m only sorry some forget now how East Germany was at the end.”