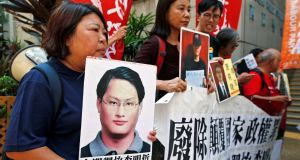 Pro-democracy protesters with a photo of Taiwanese rights activist Lee Ming-che and other activists during a demonstration in Hong Kong on Monday. Photograph: Bobby Yip/Reuters

Lee Ming-che, a human rights activist from the self-ruled island of Taiwan, has confessed to charges of subversion by the Chinese government, according to video footage of his trial released by the Beijing authorities.

“I spread some attacks, theories that maliciously attacked and defamed China’s government, the Chinese Communist Party and China’s current political system, and I incited the subversion of state power,” Mr Lee said, referring to comments written in an instant messaging group.

Mr Lee (42) is a teacher who is well known in Taiwan for his pro-democracy and rights activism. He disappeared during a trip to China in March and authorities later confirmed he was being investigated on suspicion of harming national security.

He signed a written confession that was presented to court that he incited subversion in a web group using a chat group called Liang’an Qianshou, or “hands across the Straits”, in 2012 on the popular QQ instant messaging service.

He is being charged alongside Peng Yuhua (37), a Chinese mainland resident, whom he had got to know through similar chat rooms. The hearing took place at the Intermediate People’s Court of Yueyang in Hunan province and was streamed live online.

Mr Lee’s prosecution is the first of a non-governmental organisation worker on criminal charges since Beijing introduced tighter rules governing how NGOs operate in China.

According to the indictment read out in court, Mr Lee had attacked China’s political system and advocated a western-style democratic system of government, which is forbidden in China.

Mr Lee’s wife, Lee Ching-yu, who came from Taipei for the trial, said she did not recognise the authority of the court nor had she hired any lawyers.

In the run-up to the trial, she said that she expected her husband to be pressured to make “unbearable” confessions and urged his supporters not to give them any credence.

Mr Lee apologised in the court statement, according to a report by the Xinhua news agency, which goes on to quote him as saying: “I regarded biased and malicious reports about the Chinese mainland by media in the West and Taiwan as reality, and had no clear knowledge of the mainland’s development.”

The trial is sure to add to growing tensions between Taiwan and Beijing. President Tsai Ing-wen, who leads the pro-independence Democratic Progressive Party, took office last year and relations have worsened since then.

Taiwan has been self-ruled since 1949, when the KMT Nationalists lost the civil war to the Communists and fled there. Beijing considers Taiwan an inviolable part of its territory and has threatened on occasion to take it back by force if necessary.

Taiwan is a democracy and Ms Tsai has made a number of comments criticising the mainland’s human rights record of late.