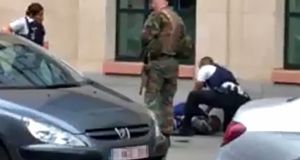 A screengrab showing police restraining a man on the pavement in the city centre of Brussels. Photograph: Belga/STR/Belgium/AFP/Getty Images

Belgian soldiers shot dead a man in the centre of Brussels after he attacked troops with a knife, police said.

“A man armed with a knife attacked a group of soldiers. The soldiers fired at him and neutralised the individual,” said Belgian federal police spokesman Jonathan Pfunde.

Esther Natus, a spokeswoman for the federal prosecutor’s office, confirmed “the suspect is dead”.

She said one soldier was “slightly injured”.

Earlier Ms Natus said, “With the identity that we currently have it is a 30-year-old man who is not known for terrorist activities.”

She said the man had shouted “Allahu Akbar” (Arabic for “God is Great”) twice during the attack.

Belgium’s anti-terror crisis centre said in a tweet that the “situation is under control”.

Belgian Prime Minister Charles Michel also tweeted: “All our support is with our soldiers. Our security services remain on alert. We are following the situation closely.”

Belgium has been on high alert since suicide bombers killed 32 people in attacks on March 22, 2016 on the Brussels main airport and subway system.