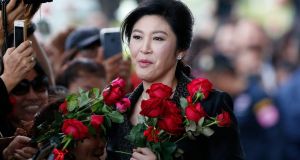 Thailand’s former prime minister Yingluck Shinawatra receives flowers from her supporters on her arrival at the Supreme Court to make final statement of the hearing in Bangkok, Thailand on August 1st. Photograph: AP Photo/Sakchai Lalit

Thailand’s supreme court has issued an arrest warrant for former prime minister Yingluck Shinawatra, making her a fugitive – like her brother – after she failed to appear for the verdict in a trial over a rice subsidy scheme.

Norawit Lalaeng, her lawyer, could not confirm on Friday that Ms Yingluck was still in the country, and attributed her failure to appear in court to an “ear fluid imbalance”, according to Reuters.

The case has struck at the heart of a deeply divided Thailand. Ms Yingluck and Thaksin Shinawatra, her older brother and former prime minister, have remained popular with the country’s rural poor but have been accused by urban Thais of buying provincial votes with the rice subsidies.

Ms Yingluck, who was formally impeached in 2015, has been charged with negligence in a case concerning a policy that paid farmers nearly twice the market price for rice.

While popular with the country’s farmers, the rice subsidies – a cornerstone of Ms Yingluck’s campaign in 2011 – are blamed for allegedly losing up to Baht500 billion (€13 billion) and giving rise to corruption.

Ms Yingluck denies any wrongdoing, saying that she did not oversee the scheme’s day-to-day operations and that it had contributed to the country’s economic development.

“The no-show was a huge surprise not only to me but also to her followers here,” said Sunai Phasuk, a senior researcher on Thailand at Human Rights Watch, the campaign group. “What happened today has widened the gap between her supporters and the pro-establishment supporters.”

The supreme court was due to read the verdict in Bangkok on Friday, but rescheduled the hearing until September 27th and issued a warrant for her arrest. A guilty charge could see Ms Yingluck imprisoned for up to 10 years and ban her from politics for life.

Supporters of Ms Yingluck consider the arrest warrant as a form of harassment that has turned the former prime minister into a fugitive, Mr Sunai said. However, her opposition will probably see this as a continuation of a tradition for the Shinawatra family to flee from prosecution at home, he added.

Since Ms Yingluck was ousted from power in 2014, Thailand has experienced waves of political and social unrest.

A military junta seized power in May that year and general Prayut Chan-o-cha has since been anointed as head of the government. The military government has been accused by critics of human rights abuses and cracking down on freedom of the press.

The new government has gone on to offer its own rice subsidy scheme.

The death of King Bhumibol Adulyadej in late 2016 added to the uncertainty for the country’s political future. The new king, Maha Vajiralongkorn, signed a new constitution in April – the nation’s 20th constitution in 85 years – that entrenched the authority of the ruling generals and monarchy.

Ms Yingluck’s brother Thaksin, who was prime minister from 2001 until he was ousted by a military coup in 2006, has lived in exile in Dubai for several years.