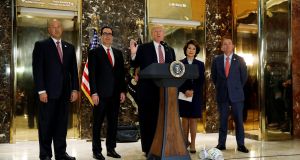 US president Donald Trump is flanked by (left to right) senior membes of his administration Gary Cohn, Steven Mnuchin, Elaine Chao and Mick Mulvaney as he gives an impromptu press conference at Trump Tower on August 15th in the wake of the clashes in Charlottesville between white supremacists and opponents, in which a young woman was killed. Photograph: Kevin Lamarque/Reuters

Gary Cohn, the top White House economic official, said the Trump administration “must do better” in condemning neo-Nazis and white supremacists following the violent protests in Charlottesville this month that sparked one of the biggest controversies of Donald Trump’s presidency.

Mr Cohn, a Jewish-American who was president of Goldman Sachs before becoming head of the White House national economic council, told the Financial Times he faced “enormous pressure” to quit after the uproar over Mr Trump’s reaction to the clashes in the Virginia university town that left one woman dead. The president first blamed “many sides” for the violence and later said that there were “very fine people” among the white supremacist groups.

“This administration can and must do better in consistently and unequivocally condemning these groups and do everything we can to heal the deep divisions that exist in our communities,” Mr Cohn said in his first public comments on the issue.

Mr Cohn, who with Treasury secretary Steven Mnuchin is leading the administration’s efforts to enact tax reform, seriously considered resigning, according to his friends, but opted to remain following conversations with Mr Trump.

“I have come under enormous pressure both to resign and to remain in my current position,” the former banker said during an interview about economic policy.

“As a patriotic American, I am reluctant to leave my post... because I feel a duty to fulfil my commitment to work on behalf of the American people. But I also feel compelled to voice my distress over the events of the last two weeks,” he said.

“Citizens standing up for equality and freedom can never be equated with white supremacists, neo-Nazis, and the KKK,” Mr Cohn added.

“As a Jewish American, I will not allow neo-Nazis ranting ‘Jews will not replace us’ to cause this Jew to leave his job. I feel deep empathy for all who have been targeted by these hate groups. We must all unite together against them.”

While Mr Cohn urged the administration to confront racism more aggressively, almost all the criticism since Charlottesville has focused on Mr Trump, as many Republicans distanced themselves from the president’s response. During the past week, Mr Trump has alternated between trying to backtrack on his comments and accusing the media of having misrepresented his words.

Mr Cohn, a major supporter of Jewish causes, faced strong criticism from some Wall Street colleagues and friends over his decision to stay. But several chief executives, including some who resigned from the White House advisory council in protest over Charlottesville, urged him to remain in order to help promote a pro-business agenda in an administration in which he is seen as a mainstream official. “I really hoped he would stay and I told him that,” one chief executive said this week.

In the coming days, Mr Cohn and the White House will start a campaign to promote tax reform – a new focus that will delight business groups, which have become increasingly disappointed by the lack of tangible policy progress over the past seven months.

Asked whether his decision to remain in the administration was influenced by the recent firing of Steve Bannon, the former White House chief strategist with whom he clashed over policy, Mr Cohn replied, “No, my decisions are my own decisions.

“I have to do what is best for me and my family. I have had numerous private conversations with the president on this topic [and] I have not been bashful saying what I think.”

Mr Cohn said officials who had been upset by Mr Trump’s remarks – who reportedly included Dina Powell, a former Goldman executive who is deputy national security adviser – had each taken their own decisions about how to respond. “This is a personal issue for each of us. We are all grappling with it. This takes time to grapple with.”

Mr Cohn was not the only official to face pressure. Mr Mnuchin, who is also a Jewish American, faced calls to resign from his Yale University classmates, who issued a public letter. But while he condemned racism, he vigorously defended the president.

“I feel compelled to let you know that the president in no way, shape or form, believes that neo-Nazi and other hate groups who endorse violence are equivalent to groups that demonstrate in peaceful and lawful ways,” Mr Mnuchin said last week.