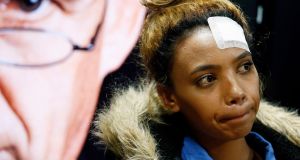 South African model Gabriella Engels, who claims she was assaulted by Zimbabwe’s first lady, Grace Mugabe, looks on during a press conference at the civil rights organisation AfriForum on Thursday in Centurion. Photograph: Phill Magakoe/AFP/Getty Images

Lawyers representing a young woman who has accused Zimbabwe’s first lady, Grace Mugabe, of assaulting her in a Johannesburg hotel have expressed their outrage over reported plans by the South African government to grant Ms Mugabe diplomatic immunity.

Unnamed government sources were quoted on Friday by local and international media outlets as saying there was no way Ms Mugabe would be arrested and charged for allegedly assaulting model Gabriella Engels (20) last weekend.

The sources said it was unlikely Ms Mugabe would face the allegations in court because of the diplomatic fallout that would occur with Zimbabwe and regional neighbours if she was arrested and charged.

“There would obviously be implications for our relations with Zimbabwe. Sadly the other countries in the region are watching us and how we are going to act,” an unnamed source said in a report published by Reuters news agency on Friday.

“What is likely to happen is that she will be allowed to go back home, and then we announce that we’ve granted [her] diplomatic immunity and wait for somebody to challenge us [legally]the sourcesaid.

Minorities’ rights lobby group AfriForum, which is providing legal assistance to Ms Engels, has vowed to oppose any move by the government to grant Ms Mugabe diplomatic immunity.

“The government has two responsibilities: one, to protect its own citizens and two, to act according to the law.The granting of diplomatic immunity would transgress the law,” AfriForum chief executive Kallie Kriel said.

The Daily Maverick news website also quoted a government source on Friday as saying Ms Mugabe would be allowed to leave South Africa on Sunday with her husband, president Robert Mugabe. He is attending the South African Development Community summit in Pretoria this weekend.

The rumours that Ms Mugabe is about to be let off the hook have caused uproar among South Africans, who have become tired of seeing politically connected people escape justice because of whom they know.

Ms Engels claims that while socialising with Ms Mugabe’s two sons – Robert and Chatunga – in a Johannesburg hotel last Sunday, Zimbabwe’s first lady entered their room and whipped her with an electrical extension cord, leaving a deep gash on her forehead.

Ms Engels lodged a complaint with the police on Monday, following which Ms Mugabe was scheduled to appear in court on Tuesday afternoon. But Ms Mugabe failed to show at the Wynburg Magistrates Court and has not been seen in public since, although the South African authorities insist she is still in the country.

It was established on Wednesday that Ms Mugabe was seeking diplomatic immunity to avoid being subjected to any legal proceedings in South Africa.

However, local legal experts insist she is not eligible for this special status for foreigners who are on state business abroad, as she was in South Africa attending to a private matter when the incident occurred.

In a move to try to defuse the situation, South Africa’s Department of International Relations and Co-operation insisted on Friday that no decision had been taken yet on Ms Mugabe’s application for diplomatic immunity.