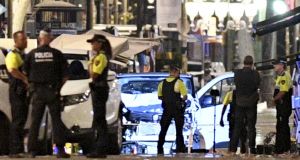 A damaged van, believed to be the one used in the attack, is surrounded by police officers in the Las Ramblas area. Photograph: David Ramos/Getty Images

President Michael D Higgins has expressed his “great sadness” at the loss of life and injuries in Barcelona.

He was among many world leaders around to pay tributes following the attack in which 13 people have died and at least 80 were injured when a van drove into crowds of people in the city centre.

“I have asked the Spanish Ambassador to convey my deepest condolences to the Government and people of Spain and to the Mayor of Barcelona,” he said.

“Barcelona has a long history of hospitality and has over the years received so many people from around the world. As President of Ireland I want to send the people of this great and welcoming city not only our sympathy but also the solidarity of the people of Ireland,” he said in a statement.

US president Donald Trump said on Twitter: “The United States condemns the terror attack in Barcelona, Spain, and will do whatever is necessary to help.” He added: “Be tough & strong, we love you!”

London stands with Barcelona against the evil of terrorism.

The United States condemns the terror attack in Barcelona, Spain, and will do whatever is necessary to help. Be tough & strong, we love you!

On behalf of Irish government, I wish to convey sincere condolences and solidarity with people of Barcelona and Spain this evening

British prime minister Theresa May said the UK “stands with Spain against terror” following the deadly attack in Barcelona.

Ms May condemned the “terrible” assault in the Spanish city which saw a van plough into pedestrians and follows a spate of similar attacks in London in recent months. She said: “My thoughts are with the victims of today’s terrible attack in Barcelona and the emergency services responding to this ongoing incident. “The UK stands with Spain against terror.”

French president Emmanuel Macron tweeted: “All my thoughts and solidarity from France for the victims of the tragic attack in Barcelona. We will remain united and determined.”

“Former US president Barack Obama tweeted: “Michelle and I are thinking of the victims and their families in Barcelona. Americans will always stand with our Spanish friends. Un abrazo.”

London Mayor Sadiq Khan said London stood with Barcelona “against the evil terrorism” following recent attacks in Westminster, London Bridge and Finsbury Park. Mr Khan wrote on Twitter: “My thoughts are with the victims of this barbaric terrorist attack in the great city of Barcelona and with their brave emergency services. “London stands with Barcelona against the evil of terrorism.”

Barcelona FC said it was “deeply saddened” by the attack, while their rivals Real Madrid expressed “solidarity with the victims and their families and friends”.

Sue Murphy, deputy leader of Manchester City Council, said: “Our hearts go out to Barcelona in the wake of this sickening incident. “Manchester stands in solidarity with that great city. We know from recent experience both how devastating this sort of attack is and how important international solidarity, community spirit and a refusal to give in to terror are in dealing with its aftermath.”