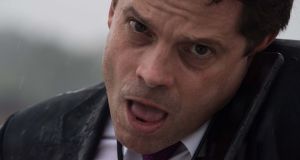 Former White House communications director Anthony Scaramucci has said that chief strategist Steve Bannon is hurting US president Donald Trump’s ability to move his agenda forward, and suggested the administration should move towards the political “mainstream”.

“You . . . got this sort of Bannon-bart influence in there, which I think is a snag on the president,” Scaramucci said on Sunday on ABC’s This Week.

The phrase “Bannon-bart” was a reference to Breitbart News, the far-right news and commentary website that Bannon ran before joining Trump’s presidential campaign.

Scaramucci’s eventful 10-day tenure as White House communications director ended on July 31st, days after he made lewd comments about Bannon and other colleagues to a New Yorker reporter. Sunday’s appearance was his first television interview since then.

Asked if Bannon will also be shown the door at the White House, Scaramucci said that “the president knows what he’s going to do” and “has a very good idea of the people that are undermining his agenda”.

Scaramucci said he recently “had a very candid conversation” with Trump.

“He’s got to move more into the mainstream, he’s got to be more into where the moderates are and the independents are,” Scaramucci said of Trump.

The former New York financier also linked the influence of Bannon to Trump’s failure to forcibly denounce white supremacists who held a rally on Saturday in Charlottesville, Virginia, that turned deadly.

“I wouldn’t have recommended that statement [in response to Charlottesville],” Scaramucci said. “He needed to be much harsher as it related to the white supremacists and the nature of that.”

Of his firing by new White House chief of staff John Kelly, Scaramucci said that “what happens was sort of meant to happen.

“Obviously, I wish they would have given me a bar of soap and told me to go wash my mouth out in the bathroom and move on.”