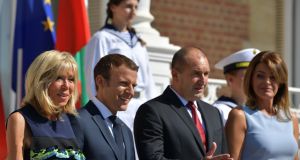 French president Emmanuel Macron has accused Poland’s populist government of being isolated and out of touch with a changing European Union, as he ended a tour of central Europe on which he rallied support for reform of the bloc.

Mr Macron’s sharp criticism of Poland prompted its prime minister, Beata Szydlo, to call him “arrogant”, and its foreign minister, Witold Waszczykowski, to claim that he “doesn’t know what is happening in this part of Europe”.

The angry exchange reveals growing frustration in Paris, Brussels and Berlin with the Eurosceptic leaders of Poland and Hungary, who reject the EU’s refugee policy and its criticism of their alleged disregard for democracy and the rule of law.

“Europe is a region created on the basis of values, a relationship with democracy and public freedoms which Poland is today in conflict with,” Mr Macron said in Varna on Bulgaria’s Black Sea coast.

“Poland today is not a country that can show Europe the way, it’s a country that has decided to go against European interests in many areas ... The country is placing itself on the margins of Europe’s future history.”

In their latest row, Brussels has threatened to try to revoke Poland’s EU voting rights unless it rethinks reforms that would give the country’s right-wing government sweeping powers over its judiciary.

Such a sanction would require unanimous approval from all member states, however, and Hungary has pledged to protect Poland, with which it jointly opposes the EU’s refugee resettlement plan and denounces alleged meddling by Brussels.

“Poland is not being isolated,” Mr Waszczykowski insisted after talks in Warsaw with his Romanian and Turkish counterparts and Nato’s secretary-general. “We are hosting an important meeting today, so President Macron is not following carefully the news, doesn’t know what is happening in this part of Europe.”

Mr Macron has not met the Polish or Hungarian prime ministers during this week’s tour of central Europe, during which he held talks with the leaders of Austria, Slovakia, Czech Republic, Romania and Bulgaria.

He has received lukewarm support for new EU rules on “posted” workers, who are sent by employers in one member state to work in another. Currently, a company is only obliged to pay such employees the minimum wage of the country where they work, and social security contributions can be paid in the firm’s home state.

This system, critics say, allows businesses in relatively low-cost countries in central Europe to send workers to more expensive parts of western Europe and significantly undercut the wage and benefits costs of rivals in the “host” state.

Ms Szydlo rejected the French call for reform, which would raise costs for Polish firms that employ hundreds of thousands of its nationals around the EU.

Mr Macron said he would not be deterred from seeking an “ambitious compromise” by “a country that has decided to isolate itself in the workings of Europe”.

“The Polish people deserve better than this. [Ms Szydlo] will have a tough time explaining why it is good to pay Polish people bad wages in Poland and elsewhere in Europe.”