‘My father was shot by his friend’: the children of Boko Haram

Islamist terror group has abducted 10,000 children with some handed over by parents 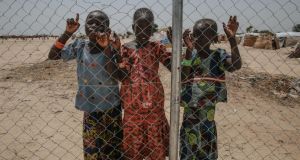 It took a few hours for Mustafa to realise they weren’t actually going to his grandmother’s house. The shy seven year old had piled into a car with his three siblings, excited to spend the day with relatives who lived a short drive from their home in rural Borno State, northeast Nigeria.

Mustafa’s father had another destination in mind: he was taking them to join Boko Haram, the Nigerian Islamist terror group that has slaughtered or abducted tens of thousands of men, women and children.

More than two years later, Mustafa is sitting in the dark office of a transit centre for people recently released from Nigerian military custody. He’s wearing ripped jeans and a stained, red T-shirt. His legs dangle from his chair, too short to touch the ground. His father is dead, his mother and siblings missing, and Mustafa’s life is in limbo while authorities decide what to do with him.

At least 10,000 children have disappeared during the devastating nine-year insurgency by Boko Haram, which has also created 40,000 orphans, according to authorities in Borno State, one of the regions in Nigeria most affected by the conflict. Children have been used as labourers, sex slaves or suicide bombers by Boko Haram, while others act as spies or guards for the vigilante groups fighting them.

There has been significant coverage of children kidnapped by armed Boko Haram fighters as they stormed towns across Nigeria’s northeast – most famously in the 2014 case of the Chibok schoolgirls, whose abduction was widely publicised, including through the creation of the hashtag #BringBackOurGirls.

But there is much less awareness of Nigerian children being given or sold to Boko Haram by their own family members. While reporting on the conflict this summer, The Irish Times came across more than a dozen cases where this has happened.

“Most abductions are carried out by close relatives,” said Labaram Babangida, a child protection officer for the UN children’s fund, Unicef, who works with young people in the Maiduguri transit centre, currently home to about two dozen Boko Haram ex-detainees.

Babangida said he had recently heard a story of a father in neighbouring Yobe State who sold his 14-year-old daughter for 400,000 naira (€924) to act as a Boko Haram suicide bomber. After there was an explosion at a nearby school, the man tried to pretend his child had been one of the victims, while secretly believing she was the attacker. His falsehood was only discovered because the daughter had turned herself over to authorities, still strapped with the explosives she refused to detonate.

Another woman interviewed by The Irish Times in Gwoza, the headquarters of Boko Haram’s short-lived “caliphate” between 2014 and 2015, said mothers she knew had been selling their daughters to militants for between 100,000 and 200,000 naira.

Though knowledge of these cases may be widespread, prosecutions are unlikely, said Nigerian human rights lawyer Emmanuel Ogebe, partly because it is too common a problem. He also noted that the northern Nigerian tradition of Almajiri – sending Muslim children to schools where they study the Koran while often begging to survive – makes it much easier for a child to end up with extremists.

“This practice has put millions of vulnerable and malleable children in the hands of unregulated mullahs,” he said.

Zak (10) was abducted by his uncle as a way to coerce his father to join Boko Haram. Zak’s father was an Arabic teacher, respected in Kano, their home city, nearly 600km from Maiduguri, far removed from Boko Haram territory.

One day Zak’s uncle arrived while his father was out and summoned Zak and his siblings. “He said he was taking us to an Islamic school,” Zak recounted. Instead, the children were taken to a Boko Haram camp, where they were kept in a small room and given little food, Zak said.

His father quickly followed after them. “My father was forced to teach people in the camp,” Zak remembered. His father began lecturing Boko Haram fighters, pretending he subscribed to the group’s philosophy – the boy said – until he was trusted enough to be given a bicycle. He used it to help them escape.

Once the family turned themselves over to the military they were arrested, Zak said. His father is still in detention and under investigation, though he continues to plead his innocence.

Like Zak, Mustafa was detained for more than a month in a cell in the city of Maiduguri’s dreaded Giwa Barracks. The names of both boys have been changed for their own safety.

Last year, Amnesty International found that 149 people had died as a result of detention in the same facility, including 11 children under six. The boys spoke of being crammed into a room with countless others, in temperatures as hot as 45 degrees.

“They were very skinny, collarbones sticking out,” one witness told me about the day the latest round of detainees were released from Giwa Barracks.

A 70-year-old man died the same day, after scrawling his wife’s phone number into the sand in the Maiduguri transit centre. Others who came with them have now been reunited with their families.

When I visited, several children were milling about the enclosed centre, which comprised a few different dorms and three dusty open courtyards, stone walls between them. Women lay on beds, or stood outside in quiet reflection. A tall Cameroonian man – awaiting repatriation – sat on a concrete slab, his head in his hands.

Two women suffering from psychiatric issues had recently been taken away to hospital, one of the supervisors told me. “That woman there, she has mental problems too,” she said, pointing at another, who was well within earshot.

During interviews, the children fidgeted as they sat. One boy crawled under a big wooden table, another rested his feet on top of it. Babangida, the child protection officer present, said it can be hard to figure out what they’ve been through. Boko Haram fighters school them on what to say, he posited, telling children if they admit they have done anything wrong they will be killed.

A poster on one wall of the transit centre asks inmates whether they’re feeling nervous, have pain all over their body, or are experiencing constant sadness or feeling guilty.

Everyone is dealing with traumatic memories. For Mustafa, his involve knowing his father was murdered after disagreeing with Boko Haram leader Abubakar Shekau. “My father was shot by his friend,” the seven year old said. “Dad’s friends then took us to another town. My mother and siblings were crying.”

“When father died, mother remarried a man with multiple wives,” Mustafa continued. “She told us to run if we heard gunshots.”

Mustafa was collecting firewood one day when he heard loud shooting. Despite his mother’s instructions, he ran back to their shelter to find her, but she was gone.

He doesn’t know where she or his siblings are but believes they’re still with Boko Haram. If they don’t show up soon he will likely be moved to live with a local government chairman – the longest anyone can stay in the transit centre is six months.

Mustafa wouldn’t talk about the future, shaking his head and staring at the ground when asked what he thought lay ahead. Instead, he spoke about lessons he’s getting in the centre. “I can’t write but I can read the ABCs,” he said, with some pride.

Mustafa also spoke shyly about his life before this turmoil – though the memories are fading quickly. “My town before was very peaceful. My father was so nice to me.”