Trump wades into history with comments on monument removal 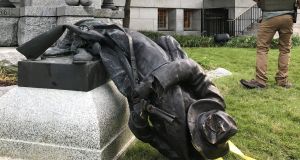 A Sheriff’s deputy stands near the toppled statue of a Confederate soldier in Durham, North Carolina. Photograph: Kate Medley/Reuters

President Donald Trump is not generally known as a student of history. But on Tuesday, during a combative exchange with reporters at Trump Tower in New York, he unwittingly waded into a complex debate about history and memory that has roiled college campuses and numerous cities over the past several years.

Asked about the white nationalist rally that ended in violence last weekend in Charlottesville, Virginia, Trump defended some who had gathered to protect a statue of Robert E Lee, and criticised the “alt-left” counterprotesters who had confronted them.

“Many of those people were there to protest the taking down of the statue of Robert E Lee,” Trump said. “This week, it is Robert E Lee and this week, Stonewall Jackson.”

George Washington and Thomas Jefferson, the president noted, were also slave owners. “Are we going to take down statues to George Washington? How about Thomas Jefferson?” “You must have to ask yourself, where does it stop?” he continued, comparing the removal of statues to “changing history.” Trump’s comments drew strongly negative reactions on Twitter from many historians, who condemned his “false equivalence” between the white nationalists and the counterprotesters. But “where does it stop?” - and just what counts as erasing history - is a question that scholars and others have found themselves asking, in much more nuanced ways, as calls have come to remove monuments not just to the Confederacy, but to erstwhile liberal heroes and pillars of the Democratic Party like Andrew Jackson (a slave owner who, as president, carried out Native American removal) and Woodrow Wilson (who as president oversaw the segregation of the federal bureaucracy).

“The debates that started two or three years ago have saturated the culture so much that even the president is now talking about them,” said John Fabian Witt, a professor of history at Yale, which earlier this year announced that it would remove John C. Calhoun’s name from a residential college.

Witt called Trump’s warning of a slippery slope a “red herring.” There have been, after all, no calls to tear down the Washington Monument. Annette Gordon-Reed, a professor of history and law at Harvard who is credited with breaking down the wall of resistance among historians to the idea that Jefferson had a sexual relationship with Sally Hemings, said that the answer to Trump’s hypothetical question about whether getting rid of Robert E Lee and Stonewall Jackson also meant junking Washington and Jefferson was a simple “no.”

There is a crucial difference between leaders like Washington and Jefferson, who helped create the United States, Gordon-Reed said, and Confederate generals like Jackson and Lee, whose main historical significance is that they took up arms against it. The comparison, she added, also “misapprehends the moral problem with the Confederacy.”

“This is not about the personality of an individual and his or her flaws,” she said. “This is about men who organised a system of government to maintain a system of slavery and to destroy the American union.” As for the idea of erasing history, it is a possibility that most scholars do not take lightly. But James Grossman, the executive director of the American Historical Association, said that Trump’s comments failed to recognise the difference between history and memory, which is always shifting.

When you alter monuments, “you’re not changing history,” he said. “You’re changing how we remember history.” Some critics of Confederate monuments have called for them to be moved to museums, rather than destroyed, or even left in place and reinterpreted, to explain the context in which they were created. Grossman noted that most Confederate monuments were constructed in two periods: the 1890s, as Jim Crow was being established, and in the 1950s, during a period of mass Southern resistance to the civil rights movement.

“We would not want to whitewash our history by pretending that Jim Crow and disenfranchisement or massive resistance to the civil rights movement never happened,” he said. “That is the part of our history that these monuments testify to.”

How the events in Charlottesville, and Trump’s comments, will affect the continuing debate over Confederate monuments remains to be seen. Witt, for one, suggested that white nationalist support might backfire. He noted that it was the 2015 murder of nine African-American churchgoers in Charleston, South Carolina, by a white supremacist that led to the removal of the Confederate flag from the grounds of the statehouse. “The amazing thing is that the president is doing more to endanger historical monuments than most of the protesters,” he said. “The alt-right is producing a world where there is more pressure to remove monuments, rather than less.” (New York Times)