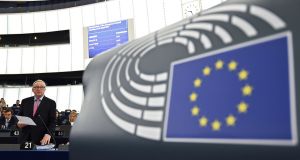 Avoiding a hard Border between Northern Ireland and the Republic is one of three priorities for the EU as it enters the first phase of Brexit negotiations, European Commission president Jean-Claude Juncker has said.

In an update on the approach of the EU27 to the upcoming talks, Mr Juncker told the European Parliament that, contrary to British hopes, there would be no discussions on the future relations between the EU and the UK until “sufficient progress” was made on ensuring an orderly British withdrawal.

Separately, Michel Barnier, the EU’s chief Brexit negotiator, said he hoped the talks would begin “the day after” the British general election on June 8th.

Mr Juncker identified three priorities for the first phase of the talks. First “and foremost” the two sides needed to deal with the situation of more than four million people – 1.2 million Britons living in the EU and about 3.2 million EU nationals living in the UK – whose lives would be directly impacted by Brexit.

The second priority was the need to agree that “all financial commitments given by the EU will be honoured by the UK” – a reference to the contentious divorce bill, estimated at up to £60 billion, that the EU argues must be paid by London before the UK leaves the bloc.

Ireland and a number of other states are concerned that attempting to deal with the UK’s financial liabilities first could create an early logjam in the talks. Last month, Minister for Foreign Affairs Charlie Flanagan warned that the Brexit talks must not be allowed to get “bogged down” at the outset with a dispute over the size of the UK’s exit bill.

Mr Juncker said the third priority was avoiding a Border on the island of Ireland. “In order to protect the peace and reconciliation process described by the Good Friday agreement, we must aim to avoid a hard Border between the Republic of Ireland and Northern Ireland, ” he told MEPs.

In his remarks, Mr Barnier told the parliament he was “moved” by his visit last week to Ireland, where he toured the Border region and addressed the Oireachtas.

“It’s a unique situation,” he said, referring to the Border and the Belfast Agreement. “We have to find a unique solution.”

On the divorce bill, Mr Barnier rejected a claim by UKIP MEP Nigel Farage that the EU27 were seeking to punish the UK for leaving. He said a final figure had not yet been determined.

“The figure will depend on the methodology. It will also depend on the date of the UK’s exit. It is not Mr Barnier who is going to set a figure. We will work together with the Brits, very calmly, to find an agreement,” he said.

Fine Gael MEP Sean Kelly said the fact that the EU, Ireland and the UK wanted to avoid a hard Border in Ireland should ensure that that could be achieved.

Sinn Féin’s Martina Anderson told Mr Juncker and Mr Barnier Brexit was the “worst thing to have happened in Ireland” since partition. She urged the EU negotiators to ensure the Belfast Agreement was protected. “The only solution is designated status for the North in the EU or reunification,” she said.

Ulster Unionist Party MEP Jim Nicholson said the Border question would be a “massive challenge” but said politicians in Dublin or Brussels should not purport to speak for the people of Northern Ireland. “Northern Ireland will speak for itself and decide for itself,” he said.

1 DUP pleads with UK to reduce salary threshold for migrant workers coming to North
2 ‘If all the immigrants go back, who will work in the meat factories and do the crap jobs?’
3 A Russian cruiser with ‘cannibal rats’: What other ‘ghost ships’ could be out there?
4 Jewish council dismayed at Sinn Féin TD’s ‘unacceptable’ tweets
5 Gardaí investigating four-lane motorway sulky race
Real news has value SUBSCRIBE