Following ceremony at the Élysée Palace, France has its new president – and first lady 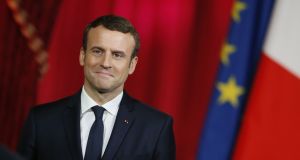 There were smiles and tears, solemnity and joy, in the salle des fêtes for Emmanuel Macron’s inauguration.

Laurent Fabius, the president of the Constitutional Council, which validates election results, said the extraordinary rise of a 39-year-old who had never before been elected to political office “turned everything upside down”.

In her sky-blue Louis Vuitton designer suit and impossibly high heels, Brigitte Macron was an integral part of the occasion. France hasn’t had a first lady since Valérie Trierweiler left the Élysée Palace, in early 2014. Mr Macron has promised to give his wife, who is nearly 25 years his senior, official status. She wants to concentrate on education, youth and culture.

He raised her clasped hand to kiss it as they left the ceremony. When he returned from his triumphal ride up the Champs-Élysées, in the back of an army command car, she waited for him on the doorstep, beaming and already in full possession of the palace.

Mr Macron does not need to prove his youth and energy. They were obvious in the way he bounded up the Élysée stairs, four at a time, after seeing out his predecessor.

He had the reputation of being a “young man in a hurry”. On Sunday he was transformed before our eyes into a monarchical president, sitting like a king in a red-satin-and-gilt armchair at Paris city hall.

President Macron is a quick study who learned from the errors of Nicolas Sarkozy and François Hollande. He hasn’t set a foot wrong since celebrating his first-round victory prematurely, on April 23rd.

Now he wants to be a “Jupiterian” president, like Jupiter, the king of gods in Roman mythology, in the tradition of Charles de Gaulle and François Mitterrand.

Mitterrand said one must “give time to time”. Macron wants to be “the master of clocks”. So on Sunday he took his time, spending an hour in private conversation with Hollande while France waited, and then lingered with well-wishers on the Champs-Élysées and in front of city hall. He didn’t rush to Berlin last night. He didn’t rush to name his prime minister.

Emmanuel Macron, France has realised, is an incredibly lucky young man. Hollande had a history of getting drenched in rainstorms. The sun always seems to come out for Macron. If his run of good luck continues he may nail down the 2024 Olympics for Paris. He might even save the country.