Can Donald Trump keep his grip on the presidency?

President Donald Trump asked then-FBI Director James Comey to shut down an investigation into ties between former White House national security adviser Michael Flynn and Russia, an associate of Comey, who has seen the memo, has said. Video: REUTERS 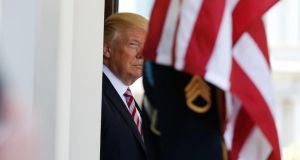 A few weeks ago only Donald Trump’s most implacable political opponents – the type derided as liberal crackpots on Fox News and other right-wing media – were talking about impeachment. But after the revelations of the past 24 hours the word has been in the air in Washington, DC, as concern mounts among the US president’s fellow Republicans and the possibility looms that the 45th president of the United States could be removed from office.

The first of the two latest crises to beset the White House was sparked when the Washington Post reported that the president shared classified information with Russia’s foreign minister, Sergei Lavrov, and ambassador to the US, Sergei Kislyak, when they visited the White House on May 10th.

Trump reportedly told them about an Islamic State plan to blow up planes using a hard-to-detect explosive packed into laptop computers. This was such sensitive information that only the most senior US officials were given access to it.

The intelligence is said to have been gathered by an Israeli spy working undercover in Islamic State. Israel shared it with the United States, officials said, on condition that the source remain confidential. President Trump’s sharing of the plot – which is now believed to be behind the recent US and UK decision to ban travellers from several Muslim-majority countries from bringing laptops, tablets and other electronic devices into the cabin when they fly – could endanger the spy’s life, according to current and former US officials.

Many observers have pointed out that any other security-cleared government employee could face criminal charges for revealing classified information; the Israeli intelligence was intended only for officials with code-word clearance, the United States’ highest security classification. As president, Trump has the authority to declassify any intelligence; on Tuesday he tweeted that he has the absolute right to share information with whomever he chooses.

According to the Washington Post, as Israel had not given the US permission to share the material with Russia, the president’s decision “endangers co-operation from an ally with access to Islamic State’s inner workings”. It added that senior White House officials tried to limit the damage, contacting the CIA and the National Security Agency to let them know that the president had revealed code-word intelligence.

The White House then had to scramble to deal with the second momentous revelation in 24 hours: Tuesday’s news that, at an Oval Office meeting shortly after he took over as president, Trump asked the former FBI chief James Comey to stop its investigation into Mike Flynn, who had resigned as national security adviser the previous day after misleading the vice-president, Mike Pence, about his contact with Russian officials. “I hope you can see your way clear to letting this go, to letting Flynn go,” Trump said, according to a memo that Comey wrote shortly after the meeting. “He is a good guy. I hope you can let this go.”

Comey, who was leading an investigation into links between the Trump campaign team and Russia, was fired by Trump last week. While the White House originally said the decision to dismiss the FBI chief was linked to his handling of the Hillary Clinton email-server controversy, Trump later told NBC that he had been considering firing Comey for some time.

The New York Times said on Wednesday that the documentation of Trump’s request “is the clearest evidence that the president has tried to directly influence the justice department and FBI investigation into links between Trump’s associates and Russia”.

But, in a sign of increasing concern among Trump’s fellow Republicans, the New York Times also reported that Jason Chaffetz, the Republican chairman of the oversight committee of the House of Representatives, which investigates waste, fraud and abuse in the federal government, has demanded that the FBI turn over all “memoranda, notes, summaries and recordings” of discussions between Trump and Comey.

Chaffetz’s was supported by Paul Ryan, the speaker of the House of Representatives, whose spokeswoman said it was appropriate for the committee to demand the memo.

And, in a sign that congressional republicans are increasingly concerned that the turmoil at the top of the executive branch is sidelining the party’s legislative programme, Mitch McConnell, the majority leader in the US Senate, told Bloomberg Television, “I think we could do with a little less drama from the White House on a lot of things, so that we can focus on our agenda.”

He also said that Trump should choose Merrick Garland, President Obama’s Supreme Court nominee, as Comey’s replacement. “I think the most important thing is for the president to pick somebody who’s apolitical, who clearly has a deep law-enforcement background,” the senator said. A figure like Garland, a former federal prosecutor, would “create a kind of wow factor that the president fully understands the role of the FBI director”.

McConnell refused to allow a Senate confirmation hearing for Garland last year; that was part of a tactic of non-co-operation with Obama’s administration. McConnell’s new approach emphasises the desire among congressional Republicans to help reduce the potential for conflict at the White House and re-energise their policy programme.

But pressure continues to mount of the Trump administration. The New York Times today asked in an editorial if Trump has obstructed justice, and the New Yorker magazine asked if the revelation about Comey’s memo is the beginning of the end for the president. Its editor, David Remnick, a biographer of Barack Obama and former Moscow correspondent for the Washington Post, called Trump’s presidency one of “ideological meanness and unsurpassing incompetence” and wrote that “the events of recent days just may be the point of no return for a presidency that has been a kind of emergency of chaos . . . injustice, and deception from its first days”.

So how could Trump be removed from office? The 25th amendment to the US constitution, which was inserted in 1967, after the assassination of President John F Kennedy, deals with succession. It says the vice-president will become president if the sitting president resigns or dies in office.

It also outlines the procedure for removing the president “if the president is unable to discharge the powers and duties of his office”. Critically, this can only happen if the vice-president and a majority of the cabinet moves against him, or if an independent panel, such as a medical council, decides he is no longer able to hold office. If the president contests the decision to remove him, Congress ultimately decides.

Only two presidents have been impeached: Andrew Johnson, in 1868, and Bill Clinton, in 1998. (Richard Nixon resigned before the House of Representatives voted to begin impeachment proceedings.)

The US constitution says that presidents can be removed from office on conviction of “treason, bribery, or other high crimes and misdemeanors”. The definition is notoriously vague: essentially, it is up to Congress to interpret it. But the suggestions that Trump sought to interfere in the FBI’s Russia investigation bring him into dangerous territory, as obstruction of justice is an impeachable offence.

Crucially, the only previous impeachment proceedings were brought by a Republican-controlled Congress against a Democratic president; it is still far from certain that Trump’s party has the stomach to impeach him.

It is also still unclear if Trump could be accused of obstructing justice, as the FBI investigation seems to have been a counterintelligence operation, not a criminal investigation.

There are no indications that either option will be pursued in the short term, as both need the support of Republicans in Congress.

Next year’s midterm elections may help change minds, however, with Republicans who are up for re-election in particularly tough districts likely to reassess their support for Trump.

With an FBI investigation and four separate congressional inquiries under way, senior Republicans may insist that these investigations run their course, though Comey may testify publicly before one of the committees – a development that could generate further revelations. Similarly, subpoenaed transcripts or tapes may reveal more incriminating information.

The White House is likely to continue to stamp down on the latest reports by focusing on the leaks that led to the reports rather than the substantive issues themselves.

Comey has not entirely been exonerated. Trump supporters have been quick to question why it took three months for this information to emerge and have also highlighted his response to the president when, according to his own memo, he appears to agree with Trump that Flynn is a good guy.

Nonetheless, this week’s developments have evoked a sense of a White House that has lost control of events and a president who has become increasingly erratic.