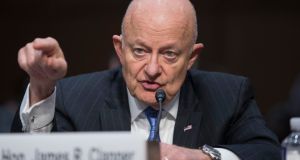 Former director of national intelligence James Clapper: “the Russians have to consider this [Comey’s sacking] as another victory on the scoreboard for them”. Photograph: Michael Reynolds/EPA

Former director of national intelligence James Clapper has accused US president Donald Trump of placing American democratic institutions “under assault” following the sacking of James Comey and cautioned that the former FBI director’s removal is “another victory” for Russia.

The forceful criticism comes as the justice department began screening candidates for Mr Comey’s replacement and Democrats renewed calls for a special prosecutor to oversee an investigation into Russia’s interference in the 2016 election. “I think in many ways our institutions are under assault,” Mr Clapper told CNN’s Face the Nation on Sunday. “Both externally, and that’s the big news here, is Russian interference in our election system. And I think as well our institutions are under assault internally.”

When asked to clarify if the internal assault came from the president directly, the former spy chief added: “Exactly.” In a later interview on ABC news, Mr Clapper added that “the Russians have to consider this [Comey’s sacking] as another victory on the scoreboard for them”.

The bleak assessment came days after Mr Trump claimed on Twitter that Mr Clapper had determined “there is no collusion” with reference to his presidential campaign and Russia, a characterisation that Mr Clapper has refuted. The former national intelligence director, who served under the Obama administration from 2010 until Mr Trump’s inauguration, said during a March interview that he had no knowledge of any collusion between the Republican’s campaign and Russian operatives.

He has since clarified that during his time in office he was also unaware of an FBI investigation into such collusion, adding on Sunday: “I don’t know if there was collusion . . . And I don’t know of any evidence to it so I can’t refute it and I can’t confirm it.” An NBC/Wall Street Journal poll released on Sunday found only 29 per cent of Americans approved of Mr Comey’s firing, while 78 per cent supported an independent commission or special prosecutor to investigate Russia’s interference in the election.

The result is likely to bolster Democrats as senate minority leader Chuck Schumer renewed calls for a special prosecutor, and raised questions over whether US attorney general Jeff Sessions had violated the terms of his recusal from the Russia investigation by recommending the removal of Mr Comey.

Mr Sessions recused himself after it emerged he had failed to disclose contacts between himself and Russian ambassador Sergey Kislyak during the 2016 campaign. “The actions of the last week make all the more reason that he should not be attorney general,” Mr Schumer told CNN on Sunday. Senate democrats are discussing the possibility of blocking Mr Trump’s eventual nominee to replace Mr Comey until a special prosecutor is appointed. Mr Schumer on Sunday indicated he was supportive of such a move. Mr Comey has rejected an invitation to testify in a closed-door senate committee hearing next week, but has reportedly expressed a desire to testify in public at a later date.

Mr Clapper said on Sunday he had been in contact with the former FBI director by email, but declined to characterise the nature of their conversation. Mr Comey has made no public comment since he was sacked on Tuesday, but was spotted on Saturday at a matinee performance of the Broadway musical Fun Home, which is currently on tour in Washington DC.

Mr Rogers has won the endorsement of the FBI agents association, which represents 13,000 former and current agents and has ties to Trump surrogate and former New York mayor Rudy Giuliani. Mr Trump told reporters on Air Force One on Saturday that he predicted the selection and nomination process “is going to go quickly”. “Almost all of them are very well-known,” Mr Trump said before taking off for Lynchburg, Virginia, where he gave the commencement address at Liberty University . “They’ve been vetted over their lifetime essentially, but very well-known, highly respected, really talented people. And that’s what we want for the FBI.” Mr Schumer, on Sunday, argued the eventual nominee should “not be a partisan politician” and “should be someone with courage” to stand up to “attempted interference” with the Russia investigation. – (Guardian service, Reuters)