In one of his last acts as president, Barack Obama, commuted the sentence of whistleblower Chelsea Manning, formerly Bradley Manning, after she had served seven years in prison. The ex-US army private leaves prison today. 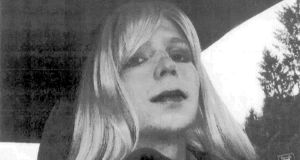 Chelsea Manning, the army private who released a vast trove of US state secrets and was punished by the US military for months in penal conditions denounced by the UN as torture, has been released from a military prison in Kansas after serving seven years of a 35-year sentence.

Ms Manning walked out to freedom after 2,545 days in military captivity. She was arrested in May 2010 outside a US army base on the outskirts of Baghdad, having leaked hundreds of thousands of documents and videos downloaded from intelligence databases to WikiLeaks.

The US military confirmed that Ms Manning was released on Wednesday morning.

A couple of hours after her release, Ms Manning said in a statement: “After another anxious four months of waiting, the day has finally arrived. I am looking forward to so much! Whatever is ahead of me is far more important than the past. I’m figuring things out right now – which is exciting, awkward, fun and all new for me.”

Ms Manning’s disclosures included Collateral Murder, the footage of a US Apache helicopter attack in Baghdad in which two Reuters journalists and other civilians were killed.

Her seven-year ordeal has seen her held captive in Iraq, Kuwait and the US, always in male-only detention facilities. In that time, she has waged a relentless legal battle to be respected as a transgender woman, winning the right to receive hormone treatment but still being subjected to male-standard hair length and dress codes.

Barack Obama granted Ms Manning clemency in his final days in office in January. In commuting to time served her 35-year sentence – the longest-ever penalty dished out in the US to an official leaker – the outgoing commander-in-chief said that “justice had been served”.

“I want that indescribable feeling of connection with people and nature again, without razor wire or a visitation booth. I want to be able to hug my family and friends again. And swimming – I want to go swimming!”

Obama’s decision to release the soldier early leaves her with legal challenges still hanging over her. Foremost of those is the fact that her sentence from 2013 under the Espionage Act remains in full force ­– a fact that her lawyers regard as ominous given the current incumbent of the White House.

As a result, even in freedom Ms Manning will continue to press vigorously for her sentence to be overturned. Her appeal, filed almost exactly a year ago in the US army court of criminal appeals, argued her 35-year sentence was “perhaps the most unjust sentence in the history of the military justice system”.

Ms Manning’s appeal lawyer, Nancy Hollander, said: “People keep assuming that just because someone is released their appeal is over. The rest of her case is still out there and we want to clear her name. She was convicted of crimes that I don’t believe she committed and her whole prosecution was unfair.”

A fundraising drive to help Ms Manning raise the legal fees needed to keep going with the appeal has been launched by Courage Foundation together with the German branch of Reporters Without Borders and the Wau Holland Foundation.

Ms Manning’s mother, Susan Manning, who is Welsh, told the Press Association she was rejoicing at news of the release. “I am so proud of Chelsea and delighted she will finally be free again.”

Ms Manning moved to Haverfordwest in Wales in 2001 when she was 14 to live with her mother, but returned to the US where she was born and brought up after school ended.

Susan Manning said: “It is going to be very hard for her to readjust after so long inside the prison’s four walls and I’m happy she will be staying in Maryland where she has family to look out for her. Chelsea is so intelligent and talented, I hope she now has the chance to go to college to complete her studies, and to do and be whatever she wants. My message to Chelsea? Two words: ‘Go, girl!’”

Though Ms Manning’s release was greeted with a chorus of rejoicing on social media, one voice struck a more sombre tone. David Coombs, the soldier’s trial lawyer, put out a statement in which he said the 35-year sentence for the army private amounted to a “grievous wrong”.

“The day that Manning is released from prison should be a day of unadulterated joy for me,” Coombs wrote. “But it’s not. It is a day that I am reflecting on how the military justice system could veer so far off course.”

The lawyer added that “the particular constellation of players involved in this case, the desire to make an example out of Manning, and the ‘win at all costs’ mentality of the prosecution created a powder keg where the ability to achieve a just result was impossible. So I don’t see Manning’s commutation as a victory. I see it as an unfortunate failure of military justice to do its job.”

In Ireland, campaigners including Amnesty International Ireland and peace and justice group Afri have called for Ms Manning to be given the honour of Freedom of Dublin in recognition of what she has done.

An online petition supporting the bid has been created by playwright Dónal O’Kelly: https://my.uplift.ie/petitions/award-the-freedom-of-dublin-to-chelsea-manningAfri co-ordinator Joe Murray highlighted Ms Manning’s Irish connections, saying her grandfather Bill Fox emigrated from Dublin to Wales at the time of the Famine.

“Chelsea has strong Irish ancestry and her family has been here numerous times as part of our campaigning and they will return here this weekend as part of our freedom celebrations. We know from our history the importance of standing up to injustice and we also know the importance of whistleblowers in revealing the often-harsh truths that deserve to be known.

“People like Chelsea who risk their personal freedom for the benefit of us all should be celebrated,” he said.

On Saturday May 20th, members of the Manning family will participate in the 30th annual Afri Famine walk in Doolough, Co Mayo. – (Guardian service/Additional reporting PA)