Unexploded bombs dropped by the US in Laos during the Vietnam war still maim and kill decades later. The COPE centre in Vientiane, Laos’s capital, is a rehab centre for victims. Video: Brenda Fitzsimons / Supported by the Simon Cumbers Media Fund

Every year, hundreds of other Loatian people continue to suffer a legacy of death, dismemberment, and disfiguration, as a result of the unexploded ordnance from the Laos civil war. Video: Brenda Fitzsimons. Supported by The Simon Cumbers Media Fund

Mark Whiteside works with MAG (Mine Advisor Group) and travels around Laos clearing some of the 80 million pieces of unexploded ordnance dropped by the US between 1964 and 1973. Video: Brenda Fitzsimons / Supported by the Simon Cumbers Media Fund 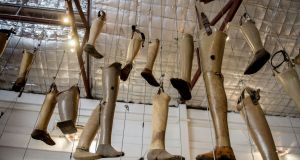 There are dozens of prosthetic legs dangling over my head. Some are homemade, bulky, medieval-looking stumps of carved wood, with buckles and thick leather straps attached to them. Others look like large versions of dolls’ legs: stiff pink plastic. They are the kind of prosthetics you expect to see in a museum, legacies of a distant past, where medical support for amputees was far cruder than it is today.

In fact, all these prosthetics were in recent use. They’re part of a display in the Cope Visitor Centre in Vientiane, the capital city of Laos. In addition to being an information centre about a war that many tourists to Laos were unaware of, Cope is also a rehabilitation centre for people who have lost limbs.

A prosthetic leg issued from here lasts about two years. The old worn-out legs are some of those now hanging in the visitor centre. The homemade ones are to demonstrate how some amputees managed before they became aware of the services offered by Cope, who will measure patients for their prosthetics, and then make them on site.

The most common type of unexploded ordnance (UXO) that remains buried and scattered all across Laos is the Blu cluster bomb. They are the size of tennis balls and 670 of them at a time were contained in shells that opened mid-air and dropped them. Not all of them exploded on impact and today, it is these lethal round pieces of metal that lie buried in rice fields, farms, villages and even school grounds, all over the country.

Close to the surface

Many of the people Cope work with are survivors of UXO explosions. The cluster bombs can sometimes lie very close to the surface, and they explode with heat, such as a villager lighting a fire on the ground above the concealed object. They also explode on impact, as in the case of children thinking they are toys and then dropping them, or when people mistakenly think they are defused, and try to take them apart to recycle the metal. Those who don’t die when these bombs explode are left with horrific injuries, sometimes losing a limb.

We are being given a tour of the rehab centre by Cope’s director, Bounlanh Phayboun. “We do a lot of work with repeat patients,” she explains.

There are a series of rooms off a central corridor and in each one, a different element of the process of creating prosthetics is being carried out. Some of the signs over the doors include “foot manufacturing”, “rectification” and “casting”.

The first room we go into is the casting room, where Xay Sengaluon and Champa Siyabunthao are working on wet plaster casts of feet and legs, sculpting them with knives and chisels. It’s like observing a surreal and disturbing art project.

There is nothing subtle about the prosthetic making going on here. These are not prosthetics with any cosmetic qualities. They are entirely functional, made with the sole purpose of walking or using an arm. Even the making of them is visceral and loud: there is sawing, hammering, yanking.

In the main public room, a number of people are waiting to test out their new prosthetics. One of them, a man who lost his left arm to a UXO, is instructed to try and pick up a cup with the hand at the end of his new arm. There are half a dozen other people sitting with him, also waiting for their new arms or legs to be fitted.

He carefully and slowly lifts up his new arm. As he does so, his T-shirt lifts up, exposing his stomach and torso. The man next to him, who is missing a leg, reaches out to pull it down. These men have both lost limbs as a result of a war that occurred before they were born, but they can still help each other to retain a measure of their dignity.