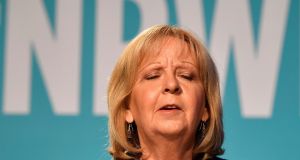 Hannelore Kraft of the Social Democratic closes her eyes as she steps down after the state election in the western German state of North Rhine-Westphalia on Sunday. Photograph: Martin Meissner

Chancellor Angela Merkel’s party decisively won an election in Germany’s most populous state on Sunday, handing her Social Democratic opponents a humiliating defeat and further boosting her momentum as she seeks a fourth term in September.

The Christian Democratic Union’s victory in North Rhine-Westphalia, home to more than one-fifth of German voters, is a resounding confirmation for Merkel (62) and boosts her standing before a series of international summits starting this month, including meetings with US president Donald Trump.

She’s due to host French president Emmanuel Macron in Berlin on Monday for their first meeting after his inauguration. “Everybody said Merkel is tired and finished,” said Annegret Kramp-Karrenbauer, a CDU member who won re-election as Saarland state premier in March. “We proved that precisely the opposite is true.”

The CDU took about 34 per cent of the vote on Sunday and the SPD less than 31 per cent, its worst showing since the second World War in its industrial stronghold, according to separate projections by public broadcasters ARD and ZDF. With their Green coalition partners slumping to 6 per cent, the SPD was voted out in the state for only the second time in the last 50 years. Support for the pro-market Free Democrats rose to about 12 per cent. For Martin Schulz’s Social Democrats, it was a disastrous third straight loss in state elections since Germany’s second-biggest party picked him as chairman and candidate for the chancellorship in January.

North Rhine-Westphalia state premier Hannelore Kraft said she’s stepping down as regional party head after the SPD sank to an all-time low in North Rhine-Westphalia. “This was a whopping defeat,” Schulz (61), a former European Parliament president who hails from the state, told reporters in Berlin. “It’s a tough day for the SPD and also tough for me personally.”

Just over four months from the federal election on September 24th, the defeat is likely to trigger debate within the SPD about its choice of candidate and campaign stance, which has focused on income equality and helping voters who feel left behind in Germany’s economic boom. For Merkel, it’s a vindication of her two-prong approach in North Rhine-Westphalia. While her surrogates talked up the chancellor’s international standing, Merkel attacked the state government’s record on debt and crime, including the mass sexual assaults on women in Cologne on New Year’s Eve in 2015. CDU supporters at party headquarters in Berlin erupted in cheers when projections from the region on the Belgian and Dutch borders were announced at 6pm local time.

“We’re in much better shape now than we would have thought 10 weeks ago,” Peter Altmaier, Merkel’s chief of staff in the chancellery, told reporters. “Elections are won at the political centre.”

North Rhine-Westphalia, Germany’s biggest regional economy, has tripped up the Social Democrats before. In 2005, then chancellor Gerhard Schröder called an early national ballot after the SPD lost an election in the state. Merkel won the federal election, lifting her to the chancellery, where she’s been ever since. – (Bloomberg)