Twelve people were killed and more than twenty hospitalized after a Fokker 100 aircraft operated by Bek Air crashed in Kazakhstan. The plane was carrying 93 passengers and five crew members. Video: Reuters 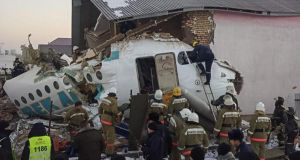 Rescuers working at the site of an airplane crash near Almaty airport, some 20km from the city of Almaty, Kazakhstan, on Friday. Photograph: Handout/EPA

A passenger jet carrying 98 people crashed into a building shortly after take-off from Almaty International Airport in Kazakhstan on Friday morning, killing at least 12 people and injuring scores more.

The crash of the Bek Air plane was the latest aviation tragedy to befall a former Soviet republic, a region plagued by a still-checkered safety record even as passenger numbers increase with the proliferation of low-cost carriers like Bek, a small Kazakh airline.

Most of the passengers survived, Kazakh authorities said. There were conflicting reports on the total number of people on board, but the Health Ministry, in a statement, eventually fixed the numbers at 93 passengers and five crew members.

Photographs carried by Kazakh news outlets showed the fuselage of the passenger jet ripped to pieces in the snow amid the rubble of a building. Rescue workers combed the wreckage. In one photograph, emergency workers were seen picking through debris – a red suitcase, a building’s window frame and pieces of the aircraft.

At 7.22am, the jet, a Dutch-made Fokker 100, bound for Nur-Sultan, the Kazakh capital, lost altitude and crashed into a two-storey building in a residential area near the airport, officials said. Eight people were confirmed dead at the scene, two more while being treated at the airport and another two after being taken to a hospital, officials said.

Ten people were reported hospitalised in critical condition. A surviving passenger, Aslan Nazaraliyev (34), said he was watching TV in an aisle seat in row 15 when the plane started “rocking like a boat” as it gained altitude after take-off. Then, he said, it started shaking violently and people on board started to panic, even as the craft continued to climb.

About one minute later, “the flight got out of control”, like a car skidding on ice, Mr Nazaraliyev, a businessman, said in a phone interview. The plane started to fall at an angle before it made impact some 20 seconds later, he said, slamming into a two-storey building, pieces of which rained down to the ground. A man and woman to his right opened the emergency exit and clambered out, slipping and falling on the plane’s icy wing.

Guided by their smartphone flashlights and by people’s moans, Mr Nazaraliyev and others dragged the injured people away from the plane for fear it would catch fire. “Where is the ambulance?” a woman can be heard saying on a video from the scene circulated by Kazakh news media. “People are asking for an ambulance, and it’s not arriving.”

In another video, apparently filmed about 20 minutes after the crash, people can be heard moaning and screaming. No emergency workers can be seen. “We’re taking them out on our own and helping on our own,” a man said.

Among the dead, Interfax reported, were the plane’s 38-year-old captain, Marat Muratbayev; an editor for a Kazakh news outlet, Dana Kruglova, who was 35; and a prominent Kazakh major general, Rustem Kaydarov, 79.

Mr Nazaraliyev said he was unharmed in the crash. After rescue workers arrived, he got a ride back to the same airport from which he had just departed and then took a cab home. He said that some survivors asked whether they would get their tickets refunded and when they would get their luggage back. “I said, ‘Guys, you should be happy you’re alive,’” Mr Nazaraliyev recalled.

Kazakh authorities have halted flights of the Fokker 100, a twin-engine model built in the 1980s and 1990s, news agencies reported, citing the Ministry of Industry and Infrastructure Development. Authorities were investigating pilot error or technical problems as possible causes of the crash, deputy prime minister Roman Sklyar said. The plane’s tail twice touched the runway as it was taking off, Sklyar said, according to Russia’s Tass state news agency.

“We don’t know where the Fokker 100 is,” an air traffic controller told another airliner after the Bek Air flight took off, according to a recording published by Kazakh news outlets. Bek Air, which was Kazakhstan’s first low-cost airline, operates seven Fokker 100 jets and flies to 12 Kazakh destinations as well as Moscow and St Petersburg, Russia. A brief statement from the airline offered condolences and warned Kazakhs about the risk of fraudsters taking advantage of the tragedy.

The incident is the second major deadly commercial aviation accident in the former Soviet Union this year. An Aeroflot plane made a fiery emergency landing in Moscow in May, killing 41 people. A Saratov Airlines crash outside Moscow last year killed all 71 aboard.

The last major commercial airline crash in Kazakhstan, which has a relatively small airline market, was in 2013, when a SCAT Airlines Canadair CRJ-200 regional jet went down outside Almaty, killing all 21 on board.

Kazakhstan’s president, Kassym-Jomart Tokayev, declared Saturday a national day of mourning and ordered all entertainment events to be cancelled across the country. In an emergency meeting at his residence, Mr Tokayev called for checks on all airlines and air travel infrastructure in the country and directed authorities to examine the legality of constructing buildings in the immediate vicinity of the Almaty airport.

“All the guilty will be punished severely in accordance with the law,” Mr Tokayev said on Twitter. Production on the Fokker 100 ceased in 1997 after the plane’s Dutch manufacturer went into bankruptcy a year earlier.

Although many airlines have retired the aircraft, more than 100 are still active, mostly in Australia and Iran, and a well-maintained airliner can remain in service for more than 30 years – the plane involved in Friday’s crash was nearly 24 years old. – New York Times